Waltzing Waters Back In Branson 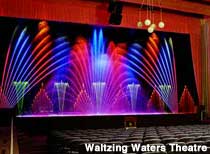 Waltzing Waters technology — invented by Germans between the wars (as was Transparent Woman technology) — is a trippy combination of prerecorded music, colored lights, and thousands of gallons of water sprayed skyward inside of an otherwise normal-looking theater. It has long dazzled vacationers in its home base of Florida, but franchising the concept has proved difficult.

Branson’s Waltzing Waters closed in 2006 after the sudden death of its legendary front man, The Amazing Frederick. “One of the co-owners was Fred’s Master Fountaineer, and, boy, when Fred died, it tore him up,” said Kevin Curtis, Waltzing Waters’ new owner. The theater was shuttered, and Kevin, a long-time Branson business owner, thought that that was a shame. “It’s been in Branson since 1984. It’s kind of an icon.”

In late 2009, Kevin convinced Waltzing Waters’ owners to give the attraction a second chance. Weeks followed of repainting, reprogramming, and replacing old circuits, relays, and hoses. Now the theater is open, showing its “Fountains of Fire” show ten times a day, seven days a week. The Master Fountaineer is back as well.

Kevin said that he plans to add more shows, such as “Fountains of Faith,” Fountains of Branson,” and “Fountains of the Seventies,” and that there’s a chance that live performers might return, eventually, as well. “We’ve got a lot of people with a lot of talent in Branson,” Kevin said. “But Fred would be a hard one to replace. He was totally a prodigy child of music.”

For now, Kevin is busy “trying to make music come more to life” and “just trying to make it shine.” Kevin said that kids in the audience are invited down at the end of each performance to try the fountain control console. Good way to find an apprentice Master Fountaineer? “It’d be hard to put an ad in a newspaper for one,” Kevin agreed, laughing. “I’d almost be scared to see what kind of replies I got back.”

Sections: Attraction News Comments Off on Waltzing Waters Back In Branson