Since 1985 a giant Indian — actually just a statue of the upper quarter of a giant Indian — has peeked from under the grandstand at Richmond, Virginia’s, minor league baseball park. It wasn’t a great place to display a 2,400-pound Indian, but it was better than having no Indian at all. 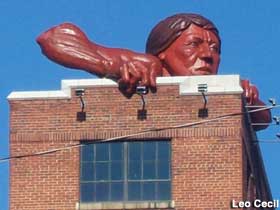 Then it was announced earlier this year that the Richmond Braves baseball team was leaving the city, and the Richmond Flying Squirrels were moving in. The Indian’s days were numbered.

Where would it go? Several locations offered to take the Indian — including a number of schools looking for a mascot — and we hoped that it wouldn’t end up someplace even worse than wedged under a grandstand, or disassembled in a municipal garage.

But on February 16 the relocation decision was made — and it was a good one. By April the Indian will be moved to the fourth-floor roof of an old Richmond tobacco factory, where a conceptual photo shows it looming over the street below. The sculptor, Paul DiPasquale, endorsed this perch because it’s near the James River (the Indian’s superhighway). The Indian seems ready to pounce on passers-by. Perhaps future generations will forget how the statue got up there, and assume that it’s a metaphor for the lurking danger of tobacco, the Indians’ secret weapon.

Directions:
Removed from rooftop perch on Jan. 18, 2019. Will move to new rooftop sometime in 2019.
Status:
In Transition

One Response to “Big Indian To Stop Peeking, Start Looming”