America’s Oldest Road Sign To Get Back On A Road

In the 1750s a British General, Edward Braddock, marched 2,000 troops through the Allegheny Mountains toward what is now Pittsburgh, Pennsylvania. Along the way a 2000-pound rock was set up near Frostburg, Maryland, engraved with distances and directions to places such as Captain Smyth’s Inn and Redstone Old Fort. People came to call it “The Braddock Stone.” It was eventually removed from the roadside and stuck in a storeroom. 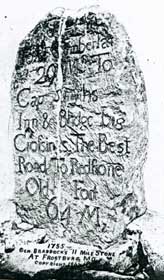 For years the Stone was promised a home — always indoors — and denied. Frostburg State University had it, but didn’t want it, and tried to give it to a local high school — but the school was torn down. The Stone ended up at the Allegany County Board of Education, which didn’t want it either. Locations were suggested and rejected: a local church, a local theater, another local high school.

Finally, according to the Cumberland Times-News, the Stone seems ready to return to the public eye. A gazebo is being built for it next to the Frostburg Museum, which means that the Stone will at least be outdoors, near a road. And once it’s in place, travelers can plan an exciting day on the Traffic Management Byway of Discovery. America’s oldest stoplight is only 4.5 hours west in Ohio.

Sections: Attraction News Comments Off on America’s Oldest Road Sign To Get Back On A Road