« To The Fish of Linesville: “Let Them Eat Bread!” | Main | America’s Oldest Road Sign To Get Back On A Road »

Strange news from the Land of Lincoln. The Arlington Heights Daily Herald reported that Illinois governor Rod Blagojevich, a democrat, flew home on the climactic day of the Democratic National Convention. And then he immediately cut hundreds of state jobs and closed nearly two dozen historic sites and parks — including the Lincoln Log Cabin in Lerna!

In the story, a fellow Illinois lawmaker accused the governor of “trying to bury the cuts and closings under all the Obama coverage,” but the governor’s spokesperson said that he returned to Illinois from the convention simply because “He wanted to watch it at home with his family.”

Another article, in the Chicago Sun Times, sets the Log Cabin closing date as October 1, and adds that this is only months before the Lincoln Bicentennial in 2009. 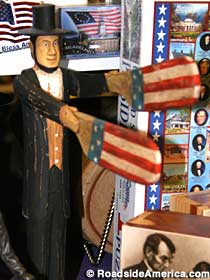 Granted, the “Lincoln Log Cabin” in Lerna is actually a replica, built in the 1930s, of a cabin that disappeared in the 1890s. And it’s not even an Abe Lincoln replica log cabin; it’s a replica of a cabin that belonged to Abe’s parents long after he had moved out and become a lawyer in Springfield. But, as its historical plaque notes, “Abraham Lincoln visited frequently.” Why would any politician slam the door on a Lincoln Log Cabin, no matter how flimsy its claim, when its in Lincoln Land on the eve of the biggest Lincoln hoopla in 100 years?

We were at the cabin earlier this month, and there was an air of doom among its employees and volunteers. In the gift shop we signed a petition to fight the closing — and then we bought a very reasonably-priced souvenir stovepipe hat.

Maybe the governor mumbled his words, and meant to close the Museum of Holography in Chicago. That would be a loss, too, but not as baffling a loss.