To The Fish of Linesville: “Let Them Eat Bread!” 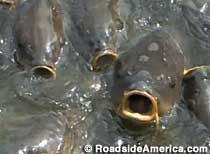 The battle for the Presidency may be heating up, but it’s tepid compared to the fish fry that’s underway in Linesville, Pennsylvania. That’s where the state has announced that, as of January 1, 2009, visitors to the Pymatuning Spillway will no longer be able to hurl bread at the local carp — which produces the miracle of Where The Ducks Walk On The Fish.

The state claims that the carp are ill-served by eating so much bread. The locals reply that the fish at Pymatuning have been gobbling baked goods for over 70 years, and appear to be doing just fine. The state counters that people who want to feed the fish will still be able to do so — they’ll just have to throw pellets purchased at the state-run concession stand. The hurlers say: fat chance of that; the state doesn’t care about the fish; it’s just trying to squeeze money out of already cash-strapped visitors. 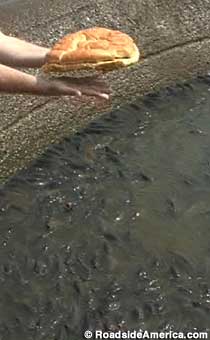 An article in the Sharon Herald now reports that several local lawmakers — after receiving “countless phone calls, e-mails, and personal visits” — have sided with the hurlers. An online petition to “preserve the tradition” of throwing bread into the Spillway can be signed here, and a public meeting on September 8 will give the Ducks-on-Fish constituency a chance to be heard.

Public outcry has already prolonged the life of Airstream Ranch in 2008 (although it’s hit some potholes along the way). If enough voices are raised, perhaps the freedom to hurl bread into a carpet of carp can be preserved, too. We’ve seen it, and it’s worth fighting for.

Where the Ducks Walk on the Fish

More on Where the Ducks Walk on the Fish

3 Responses to “To The Fish of Linesville: “Let Them Eat Bread!””