« Monster Head Finds New Home, Stays In Tennessee | Main | Be It Ever So Humble, There’s No Place Like A Bottle House »

We don’t devote much energy to temporary attractions, preferring those that will actually be there when you drive by. But we would be negligent in our hey-look-at-THAT duties if we didn’t call attention to Bad Dog, a piece of public art that will only hang around until May 5, 2013. 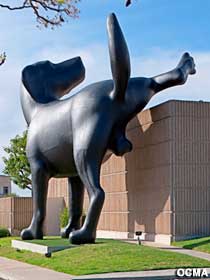 Bad Dog is a 28-foot-tall puppy lifting his leg and “establishing his territory” on an outside wall of the Orange County Museum of Art. When its installation was complete on February 13, the statue did just what it looks like it’s doing: it sprayed the wall (with yellow paint). Sadly for those who missed it, this was a one-time-only art event.

Bad Dog was created by artist Richard Jackson as a kind of billboard for his Ain’t Painting a Pain retrospective, which currently fills the Newport Beach, California, museum (until it all comes down in early May).

According to Orange County Museum of Art spokeswoman Kirsten Schmidt, Bad Dog is a hit with traditionally conservative Orange County. She was empathetic to our suggestions that it would be great to keep the puppy around, but she pointed out that it also wouldn’t be fair to all of the other artists who will follow Jackson’s retrospective.

In other words, if you want to see the big Bad Dog, do it now.

Directions:
Orange County Museum of Art. On the north side of San Clemente Drive, which is just southeast of the intersection of Jamboree Rd and San Joaquin Hills Rd.
Hours:
Temporary exhibit, has moved on. (Call to verify)
Phone:
949-759-1122
Admission:
Free
Status:
Gone