Be It Ever So Humble, There’s No Place Like A Bottle House

“I just woke up one day and told my wife, ‘I want to build a bottle house.'” 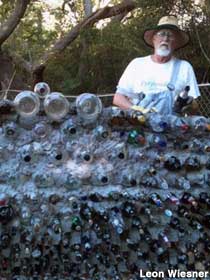 The man speaking was Leon Wiesner, a former art professor who in 2000 had moved to the sleepy town of Carrabelle, Florida. Bottle houses have historically been built from necessity, not choice, usually in places with a surplus of people and a lack of wood. Leon was familiar with several other bottle houses around North America, but said that his interest had been purely academic until that fateful morning.

“It’s a quaint little town, very picturesque, but that’s it,” he said of Carrabelle. “I figured it needed a little visual something-or-other.”

That something-or-other turned out to be Leon’s house, built in the shape of a pentagon, with nearly 500 square feet of bottle walls incorporating over 6,000 bottles. He finished it in December 2012, after 11 months of work. Not satisfied, Leon then built a 15-foot-tall bottle lighthouse in a mere month, a speed partly attributable to Leon’s new-found bottle skills, and partly to the lighthouse’s need for fewer bottles. Leon told us that he wants to install a rotating beacon in the lighthouse, but it will have to wait until he has the cash to purchase a wind turbine to power it. “I’ve spent all my money on mortar.”

With the lighthouse now complete, Leon next plans to build a St. Louis-style bottle arch (“maybe 16 feet tall”) and an oversize Penrose bottle triangle (“It’s an impossible structure. I love a challenge”). 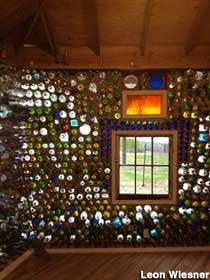 Leon said that he and his wife like to spend afternoons in the little bottle house, enjoying the light that pours through its colorful walls (Their full-time house is elsewhere on the property). The bottle house is usually occupied by Leon’s dog, Zach, but Leon says that visitors are always welcome. He lights it from within at night, so that travelers can see its rainbow glow.

Since most people who’ve built bottle houses are now dead, we asked Leon what special tips he could share on construction. “If you have a county landfill,” he said, “it’s good to make friends with the prisoners, so they’ll save you certain bottle colors” (blues are particularly hard to find). Leon said that it’s important to have a plan and to stick to it (“with bottles you can’t switch in mid-stream”) and that it’s always smart to budget for more time and more bottles than you’d think (Leon needed an extra 3,500 bottles to finish his house).

“And in a small town,” he said, “never get the government involved. Do it, then ask forgiveness if needed.” For Leon this proved unnecessary, as the town now features his house in its list of attractions.

604 SE Ave. F, Carrabelle, FL
Directions:
Southeast side of town. From US Hwy 98 turn south on 7th St., drive until it ends, then turn right. You'll soon see the bottle buildings ahead, on the right.
Hours:
Open when the gate is open. Local health policies may affect hours and access.
RA Rates:
Worth a Detour

One Response to “Be It Ever So Humble, There’s No Place Like A Bottle House”