« Be It Ever So Humble, There’s No Place Like A Bottle House | Main | Preserving Our American Right To Walk Through A Tree »

When A Monster Is Not A Monster

Lincoln City, Oregon, wanted a sculpture for its park on Devil’s Lake, something fun for a place popular with children. Heidi Erickson won the commission and began to work — and work and work. By the time she was finished in August 2012 her two-ton sculpture stood 13 feet tall and 18 feet long — four or five times bigger than Lincoln City had envisioned, according to Sandy Pfaff, director of the town’s Convention and Visitor Bureau. And it was a dragon. 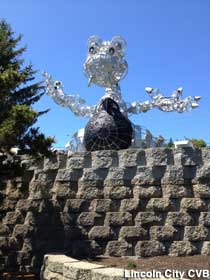 The unexpectedly big dragon at Devil’s Lake gave Lincoln City an unexpected problem. Devil’s Lake had been given its name for a reason. According to legend, the lake was (and perhaps still is) the home of a terrifying monster, known for dragging native fishermen to their doom.

And then Heidi Erickson unveiled her in-your-face dragon at Devil’s Lake.

The dragon is clearly more Puff than monster, with a lovable pot belly and comically big feet. It has a big, red, cartoon heart, visible within its chest, sealed with offerings presented by well-wishers at the statue’s dedication. It’s even made from recycled steel and rubber — a perfectly PR-friendly work of art. And yet the connection naturally was made that this was Lincoln City’s tribute to the Devil’s Lake Monster, which, of course, was an association that Lincoln City and Heidi Erickson did not want at all. 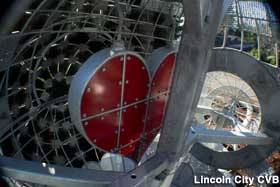 What the dragon needed was its own identity, and it was finally supplied in February 2013. A contest among local schoolchildren produced 256 possible names, from which Sparky the Wish Guardian was chosen. Heidi Erickson called it a “cheerful” name. Sandy Pfaff moved on to her next problem: how to keep people from climbing all over Lincoln City’s expensive new work of art (The problem was solved, said Sandy, by surrounding the sculpture with “bushes that wouldn’t be comfortable to climb through”).

We asked Sandy, now that Sparky is officially not a monster, and given that monsters have become acceptable statue subjects for other towns (including at least one in Oregon), if Lincoln City would ever, possibly, consider erecting another, official statue of the Devil’s Lake Monster. She said no.

Sections: Attraction News, Statues Comments Off on When A Monster Is Not A Monster

NE Regatta Park Rd, Lincoln City, OR
Directions:
At the entrance to Regatta Park. From US Hwy 101 in town turn east onto NE 14th St. Drive about a mile. You'll see the Park and sculpture on the right.
Admission:
Free
RA Rates:
Worth a Detour