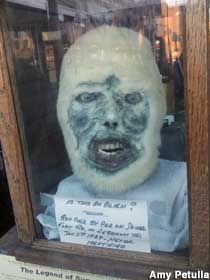 On January 5, 1989, a blueish, apelike creature was killed by a pickup truck on Sugar Flat Road outside of Lebanon, Tennessee. For some reason the body wasn’t preserved, but the head was. The driver gave it to Frank “Cuz” Buster, who sat it on a towel, stuck it in a glass box, and put it in the window of his Lebanon antiques store.

Fast forward 24 years. Buster’s son, Sterling Buster, decided to go out of business, and put up a sign in the store window inviting dealers to call and put bids on its stock. As it happened, Amy Petulla was in town, as a tourist, just to see the head, having read about it on RoadsideAmerica.com. She saw the sign. “I thought, I’m gonna go ahead and call before anybody else gets a chance to,” she told us.

Amy was about to open Ghost Tours and Curiosities, a storefront mini-museum in downtown Chattanooga, about two hours away. “I talked about it with Sterling,” she said, “and he agreed that rather than sitting on his mantel, which is where the head would’ve ended up, that it was something that needed to be displayed.”

Leery of its cost, which was substantial, Amy agreed to a novel arrangement: she would lease the monster head for several months, and if it brought in enough extra business, then she would buy it. 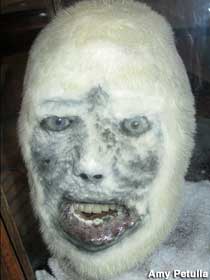 Ghost Tours and Curiosities is scheduled to open March 1. The storefront museum is meant to encourage people to sign up for Amy’s Chattanooga ghost tours. Its location, across from the city aquarium and history museum, guarantees that the head will be seen by many more people than it was in Lebanon. Amy plans to hang a big banner outside, “Home of the Sugar Flat Road Creature Head” — those who just want to see the head will be charged a dollar, while those who take a tour can see it for free. She also hopes to interest people from the history museum in the head, if only for suggestions on how to build a more preservation-minded display case.

Amy figures that she’ll know whether or not to buy the head by the end of July, so everyone should visit Ghost Tours and Curiosities before then, validating the value of her monstrous acquisition. Amy hopes that non-human visitors will be interested as well. “Chattanooga Battlefield is supposed to be inhabited by a Bigfoot,” she said. “So maybe the head will get it attracted or stirred up some.”

More on Head of the Sugar Flat Road Creature