No matter how you feel about guns, it’s hard to resist the urge to fire one that’s 66 feet long. 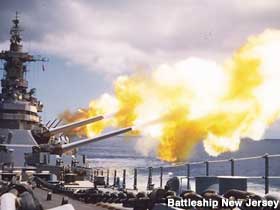 That’s the thinking behind the Turret II Experience at the Battleship New Jersey. The former warship, docked in Camden since 2001 as a tourist destination, unveiled the new attraction-within-an-attraction in April 2013. At $30.00 per person, it’s a way to bring in added revenue after the state scuttled funding for the battleship (This year, New Jersey’s contribution to its namesake is $0).

The tours, scheduled twice a week, take paying customers five decks deep into the ship and then into the turret, through a special visitor entrance cut into it. The tour-takers “play the role of the crew,” according to a battleship press release: they move shells into the hoist; load powder bags into the chamber; input distance, wind speed, and other variables into a vintage analog computer (If you’ve seen the movie Battleship, you already know the drill). Each visitor is then offered the chance to wrap his or her hands around the giant brass trigger and “fire” the gun. 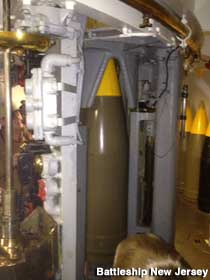 According to the Philadelphia Inquirer, the experience is convincing enough — with video of the hell-howitzer blasting away and subsonic rumbles and shakes — that at least some young participants have believed that they may have accidentally leveled nearby Philadelphia.

The gun, the largest in the U.S. Navy, hurled 1,900-pound shells up to 23 miles against foes ranging from Imperial Japan to Saddam Hussein’s Iraq. 23 miles is just shy of the state capital in Trenton, a fact that has not been lost on Battleship New Jersey’s publicists, who playfully insist that the Turret II Experience in no way suggests any hard feelings between New Jersey’s battleship and its politicians. 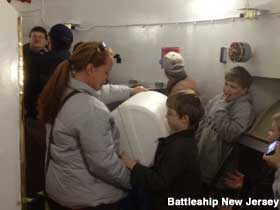 The Turret II Experience reminds us of the Tang Submarine Experience at the National World War II Museum in Louisiana, which also opened this year. The Tang, however, is fake, while the Turret takes place in a real turret using real equipment. It is, the battleship says, only the first step in a five-year plan that will progressively open older, deeper parts of the ship to the public. Perhaps in 2018 we can look forward to the debut of The Bilge Experience. New Jersey’s lawmakers would certainly be invited.

100 Clinton St., Camden, NJ
Directions:
In Camden, drive west on Martin Luther King Blvd. At the Wiggins Park circle, turn right, drive past the Aquarium, turn right again just past the tall building on the right, then right again on Delaware. Cross back under MLK Blvd and the parking garage will be on the right.
Hours:
Summer daily 9:30-5, fewer hours and days off-season (Call to verify) Local health policies may affect hours and access.
Phone:
866-877-6262
Admission:
Adults $22.
RA Rates:
Worth a Detour