« Space Shuttle Lottery: Well, We Got Some Of It Right | Main | Castle Blood: Where Every Day Is Halloween » 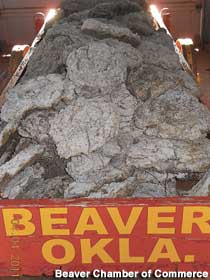 If you’re within a few hundred miles of Beaver, Oklahoma, stop by on Saturday, April 16. That’s when the town hosts the 42nd annual World Champion Cow Chip Throwing Contest, the oldest such competition anywhere, and the acknowledged apex of the sport.

If you have $20 you can participate — although last-minute entries should call first to make sure that cow chips are available.

April Jamison, Cow Chip Throw president, told us that she personally helped to hand-pick the competition chips from neighboring fields. “You want to do it on a day when it hasn’t rained,” she said. “You don’t want to end up drying them in your oven.” Chips are selected for size (must be at least six inches across) and symmetry, then loaded into a special wagon that’s been used since the competition’s earliest years. Each hurler can choose two chips from the wagon; the one they hurl the farthest establishes their place in the rankings. A good grip is vital to a winning throw, but April warns contestants never to lick their fingers after picking up a cow chip. 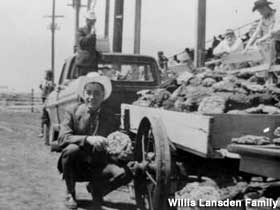 The contest has gone on for so long that even April can’t say for sure why it’s held the third weekend of April, or who came up with the idea for King Cow Chip, its crumbly regal mascot, who appears on the plaques of all competition winners.

People who can’t make it Beaver for the contest can still visit the town’s year-round photo-op statue of an oversized chip-clutching beaver in its Pizza Hut parking lot. April said that she was working to relocate the statue into a permanent snapshot-worthy shelter. “I’m amazed at the number of people who stop by to take their picture with him,” she said, “but where he is now, you’re tempted to glue pepperonis on that chip.”

Douglas Ave., Beaver, OK
Directions:
Statue is on wheels, and moves to various locations up and down Douglas Ave./US 270. We last saw it parked near Pizza Hut at corner of US 270 and Fifth St.
Phone:
580-625-4726
Admission:
Free.
RA Rates:
Worth a Detour

More on Cow Chip Throwing Capital of the World