Space Shuttle Lottery: Well, We Got Some Of It Right

It was over a year ago that we predicted the destinations of the four surviving Spaces Shuttles, sure to become big roadside attractions and objects of bafflement in the space travel-starved years to come. 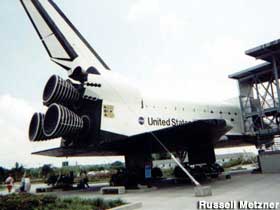 We rate our prediction scorecard: five victories and three losses.

NASA announced today that the Shuttles will go to DC (as expected), to the Intrepid Air and Space Museum in New York, to the Kennedy Space Center in Florida, and to the California Science Center in California.

The California Science Center was the surprise winner. Known until now (at least to us) only for having a 50-Foot-Tall Woman With Visible Organs, we frankly can’t figure out how NASA expects to get a Shuttle inside a museum in the heart of Los Angeles.

Big losers include the Midwest, which got no Shuttles at all, and the Seattle Museum of Flight, which had confidently already begun building a $12 million gallery to display a Shuttle. NASA has perhaps tried to soften the blow by reportedly giving SMF the full-size Shuttle trainer that’s currently at the Johnson Space Center — which is the biggest loser of all. Not only didn’t JSC get the Shuttle it craved, it’s also losing the dummy Shuttle that it already had.

Sections: Attraction News Comments Off on Space Shuttle Lottery: Well, We Got Some Of It Right