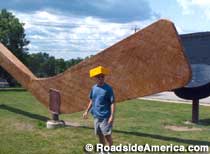 An article in the Mesabi Daily News reports that there is agitation to move the so-called World’s Largest Hockey Stick from downtown Eveleth, Minnesota, to a spot near the Hockey Hall of Fame, out by the interstate. Something about the story seemed familiar. Hadn’t we read this before?

We had. Turns out that the exact same suggestion was being argued in Eveleth ten years ago. And that was over the OLD world’s largest hockey stick; the one three feet shorter than the current model (Eveleth paid $60,000 in 2002 for the new stick, and it’s still shorter than one in Canada).

A town councilor named Tom Kallevig is the catalyst behind this latest proposed move, according to the story. “Kallevig said the hockey stick isn’t a vacation destination,” the article asserts. “But if the stick were visible from the highway, people might stop to see it and in turn visit the Hall of Fame.”

Rather than move a 10,000-pound hockey stick, wouldn’t it be cheaper to build a billboard announcing it? Then people visiting the Hall of Fame would certainly drive into town. But perhaps they do need an ancillary claim now that Canada rules. Hmm…. how about a colossal pair of front teeth embedded in the billboard?