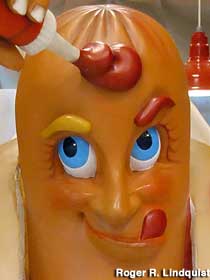 Hot Dog Man is a popular, if relatively recent, mass-produced roadside statue: a six-foot-tall, bun-wrapped wiener, licking his lips in anticipation as he pours ketchup on his own head. The saucy sausage has been reported from New Jersey to Washington. And last month, a Hot Dog Man in Earlysville, Virginia, made the news when it was kidnapped on the night of April 9.

Now a story out of the Lynchburg News and Advance reports that “Harry the Hot Dog” has been found — buried in the woods next to a local trailer park. Both of his arms, including the one hoisting the ketchup, were broken off and are missing, but his owner has vowed to rebuild him. The police reportedly dug Harry out of his shallow grave with their bare hands after receiving an anonymous tip.

Was Harry abducted out of anger or love? His rude treatment suggests that some sort of “extraordinary rendition” was carried out on poor Harry, but why? Truly these are dark days for the formerly happy-go-lucky world of wienerdom — first those one-third-pound Angus burgers, and now this.

Update – May 10, 2008: Police arrested one of the suspected wiener-nappers, a 23-year old man from Charlottesville, and have a warrant for a second culprit. The charges are grand larceny and felony destruction of property.