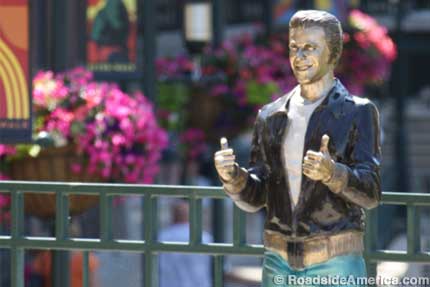 The movement to rid our home products and snacks of additives and dyes now has a similar statuesque champion: The Bronz Fonz in Milwaukee, Wisconsin.

When the statue of Arthur “The Fonz” Fonzarelli, star of TV’s “Happy Days” (set in Milwaukee) was first cast in 2008, it was given a golden sheen, mimicking an Oscar. But the city didn’t like that, so Fonzie’s clothes were tinted in various shades: blue jeans, white t-shirt, black leather jacket. Unfortunately his skin was left gold, and when the blue oxide in his jeans abruptly faded they were coated in bright blue auto paint. It made the bronze statue a colorful mess regardless of one’s opinion of the merits of a permanent Fonzie tribute, which was already low among Milwaukee’s upper crust. Splattering it with protest paint would not have made much difference.

So in early 2022 Fonzie was given yet another makeover. This time, all of the added colors were stripped off. Instead of paint or coatings, the bronze itself was tinted in darker shades to give him his blackish jacket, boots, and hair — a more subtle, dignified look for a mature pop culture icon. Bolted along the city’s Riverwalk, he’s a photo op that’s hard to pass up.

When this latest version of Fonzie was unveiled on March 11, the statue was described as “truly bronze” by a spokesperson for the city’s visitor bureau — although of course Fonzie had been truly bronze all along.

Now, however, he’s an all-natural greaser: a statue appropriate for the 21st century. 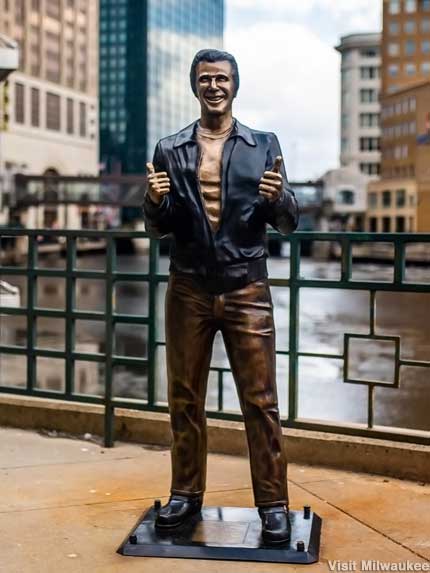