The Casket of Howard Finster

“Sometimes kids are creeped out by the casket,” said Jordan Poole, executive director of the Paradise Garden Foundation. Jordan was showing us around Paradise Gardens, an enclave built in the 1970s by folk artist Howard Finster in Summerville, Georgia. The casket was Howard’s, and he wanted to wind up inside it. 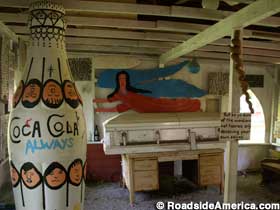 Howard would not have been the first folk artist to become a perpetual exhibit. Sam Dinsmoor, who built the Garden of Eden in Lucas, Kansas, is entombed at his Garden in a glass sarcophagus within a pyramid, still visible (if a bit green) after nearly a century.

Howard’s casket rests atop an old office desk in an open-air chapel with pews, a dirt floor, and a giant Coca-Cola bottle. Accompanying signs, written by Howard, explain that the casket was personally placed on this spot by Howard. When he died, Howard wanted to be cremated with his ashes placed in the casket along with a million letters written by fans. Jordan believed that the casket was in fact filled with letters, but couldn’t say for sure because he didn’t have a key to open it.

One thing that for sure isn’t in the casket is Howard. Despite his wishes, he was buried in 2001 in a Summerville churchyard, then later dug up and moved to a cemetery in his hometown of Valley Head, Alabama. 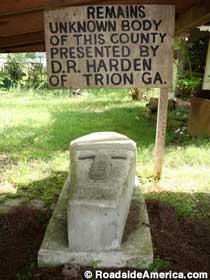 Paradise Gardens does have a corpse, however, the “unknown body” of Chattooga County, buried in a sarcophagus built by Howard. It’s a 200-year-old skeleton of a woman, said Jordan, possibly a slave, found while a local doctor was digging a foundation for his house. “It just made sense that Howard would take it,” said Jordan, “and give it a dignified burial.”

We asked Jordan if the ghost of Howard ever appeared at Paradise Gardens, perhaps upset that his casket wishes hadn’t been obeyed. “I don’t sense anything,” said Jordan. “I think that man died and went to heaven.”

Sections: Places Comments Off on The Casket of Howard Finster