The Cathedral of Junk has, like medieval cathedrals, risen slowly over many decades. It’s the creation of Vince Hannemann, who in the 1980s began taking in cast-offs and bric-a-brac and, piece by piece, massing them into a junk-art structure in his back yard. 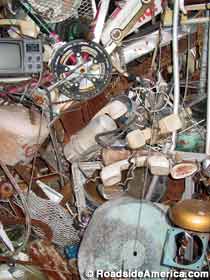 The Cathedral has a spiritual predecessor, George Daynor’s Palace of Depression in Vineland, New Jersey. Unfortunately, that attraction was torn down. Fans of the Cathedral want it to avoid that fate. But the Public Assembly Code Enforcement Unit of the city of Austin has demanded that Vince remove certain items from his creation by March 31, or the whole thing will be bulldozed!

(We contributed a couple of junk pieces when we visited, and would gladly take them back if it would help).

The Cathedral’s fans are rallying, volunteering time over the next several days to clean up, add structural supports, and strip the edifice of its offending components, hoping to satisfy the city and prevent its closing to the public. We want their efforts to succeed. If they fail, however, the Cathedral may still rise from its ruins, as did the Palace of Depression. Unfortunately, in the latter’s case, it’s taken over 40 years.

But let’s hope it doesn’t come to that.

More on Cathedral of Junk