Jeff Lohaud is a Minneapolis-based artist with a dumpling dream: a vision inspired by the Eastern European version of stuffed dough called a pierogi. His ambition is to raise  $100,000 to fund the creation of a 17-foot-tall cast bronze sculpture of a pierogi, perched atop a formidable metal fork. The masonry base will display the words “Northeast Culture World Culture” and the pedestal sides list the world’s “pierogi-like foods” including momo, pasties, potstickers, and empanadas. He speaketh The International Language of the Starch-Induced Stupor.

To finagle the funds necessary, Lohaus is selling statue maquettes of various sizes: from a 7-inch-tall pewter version at $100 to the deluxe 15-inch-tall personalized bronze limited edition for $2,500.

If the Northeast Minneapolis Pierogi Project comes to fruition, the statue will eventually soar above a community garden, engendering neighborhood pierogi pride for years to come. 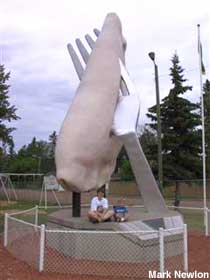 But we wonder if Lohaus realizes that the crafty and competitive Canadians have had their own massive pierogi-on-a-fork statue since 1993. Despite their insistance on an eccentric spelling variation, there is no denying that the village of Glendon in Alberta is currently home to “The World’s Largest Pyrogy”! Glendon also boasts a Pyrogy Drive, Pyrogy Park, Pyrogy Cafe and an annual fall Pyrogy Festival.

As seen in this memorable vintage clip, former mayor and local school bus driver Johnny Demienko was the project’s primary booster; he did admit that the fork was not in the original design and was added later on in response to some helpful critique that pointed out that a pyrogy on its own looks a lot like “a cow pile or something”.

But the most dumpling-crazy place on earth is probably Utsunomiya, a Japanese prefecture 75 miles north of Tokyo. “The Gyoza Capital of Japan” is home to over 200 gyoza-themed restaurants. And does it have a statue? You bet!: a version of Venus emerging from a gyoza wrapper. (The statue was broken in a careless construction accident in 2008, but has since been repaired and moved to a new location.)