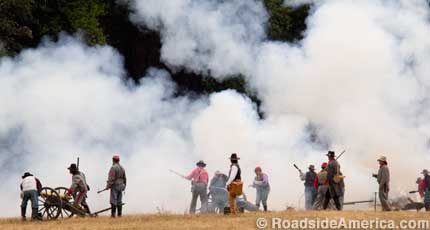 Last month, while wandering the backroads, we spotted a cheery banner advertising: “Civil War Days.” Bit of a shock, because we were on the northern California coast. Was there a famous battle here?

Civil War Days, a full-blown multi-attack reenactment, is held one weekend every July in Duncan Mills — where battalions of Union and Confederate soldiers skirmish with swords, rifles, artillery. There are even cavalry charges. It claims to be one of the largest Civil War reenactments west of the Mississippi, and we don’t doubt it. 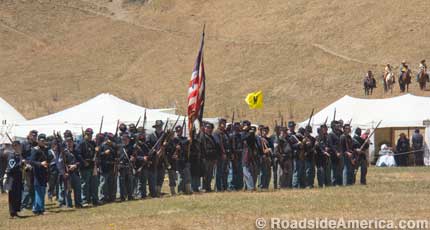 Though not a roadside attraction, we were curious how the Left Coast handles a 150-plus-year old conflict that happened somewhere else (and necessitates waving a few Confederate battle flags). It turned out to be a family-friendly event, no overt politics but plenty of history and meticulous military action, with a large assemblage of enthusiasts camping out for the weekend.

2019 was the 20th anniversary of Civil War Days. Reenactments elsewhere typically occur during cooler months, but the coastal climate and morning fog along the Russian River make for relatively comfortable melees. The landscape is dramatic — a Y-shaped valley, ringed by forest and nestling a grove of coastal redwoods, amid steep scenic hillsides. The property is a privately owned cow pasture, transformed annually by volunteers into a 19th century killing field. 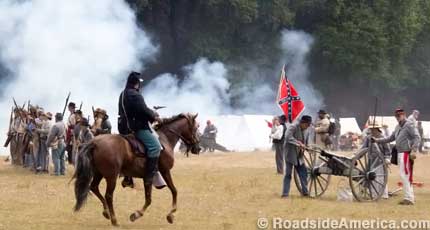 Spectator bleachers line one side of the field; the rest is kept impeccably accurate to the 1860s. Amenities such as portable toilets are hidden behind burlap shrouds. Visitors can wander the fields and military camps during long intervals, but then clear out when the hostilities are about to start. All attendees have the schedule to assure they won’t miss out on something: a vintage baseball game, a mounted artillery demonstration….

There’s an extensive “Sutler” — civilians tagged along behind armies on the move, set up tents and sold their wares. The merchants provide all the accoutrements needed to live in the 19th century — or at least, through the weekend as a re-enactor — clothing, supplies, weapons, food, and souvenirs. Plenty of time to shop between battles, so we headed toward one of the military camps, and heard singing coming from the redwood grove — the Sunday morning worship service. Stepping into the dark, cool grove, we could see that some congregants were on horseback. 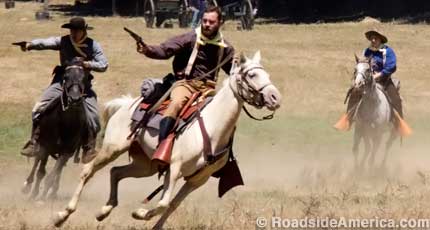 It was soon battle time. From the safety of the bleachers, we had a perfect view. It started with a few scouts and sharpshooters, a couple of mounted patrols, and quickly ramped up. Dozens of soldiers marched from tent camps, muzzle-loaded artillery wheeled into position. Suddenly, hundreds of troops charged, turned in unison, fired rifles and reloaded.

These weren’t set piece recreations of actual historic battles. Loosely sketched maneuvers and entry timetables evolve into the live chaos. The regiments were from California and elsewhere, named after real Civil War units (the 20th Maine Company G, known for their “charges with fixed bayonets” according to a factsheet, is based in Marin County, California). 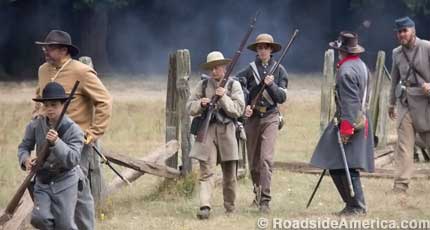 It’s somewhat overwhelming to witness. Chaotic, loud (bring earplugs). There were mounted cavalry sword attacks, and hand to hand combat. At one point, we saw an entire clump of soldiers fall dead from a cannon blast at close range.

We swear, a guy with modern cameras was flushed out of the forest by cavalry and shot. His corpse was out in the brush for a long time.

A horse-drawn ambulance wagon appeared to cart off the wounded. Between battles, in the Union camp, we saw a surgeon’s tent, easy to identify by its pile of bloody amputated (plastic) limbs. 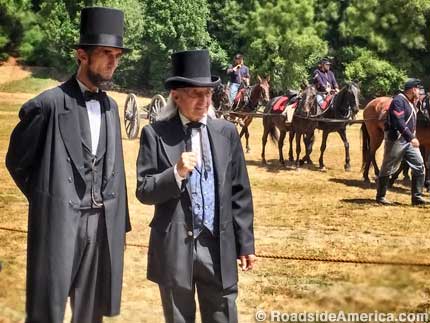 One returning Civil War Days highlight is the reassuring presence of Abraham Lincoln. Our 16th president saunters around the civilian camp and fields with a military entourage. He greets every passerby. He gives speeches. Lincoln presenter Robert Broski brings America’s Great Emancipator to life. He’s a tall, cordial Abe, quietly introspective at the right moments. After one lopsided battle, President Lincoln asked the band to play “Dixie” as consolation for the losing side.

There was another terrific interpreter playing Alexander Stephens. Most people don’t know who Stephens is, let alone what he looked like. Our Stephens endured about five seconds of blank stares before telling us “I’m Alexander Stephens, vice president of the Confederacy!” Well, duh. Stephens shared that he and Lincoln were good friends before the war. 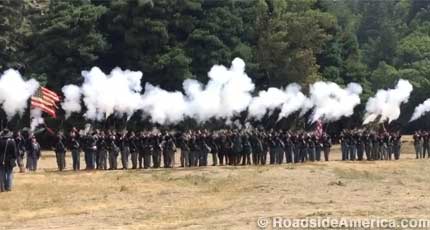 It turns out there was a role for California in the Civil War — it had become a state a decade earlier in 1850, had abolished slavery and remained loyal to the Union. California’s many southern sympathizers were locally ineffective during the war. In 2019, there was a noticeable imbalance between the Blue and Gray — at least 2/3rds of the re-enactors were in Union units. One civilian merchant told us this wasn’t always the case — that some years it was more balanced, and the South would actually win a few fights. 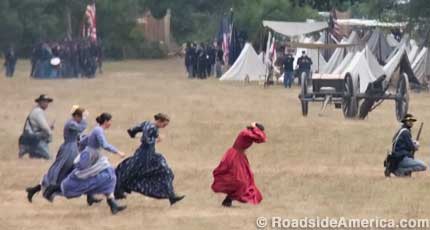 And while the audience in the bleachers is diverse, we’d love to see an African American unit or two on the field of battle. A few Union Army black units formed in the East after the movie “Glory,” and it’s an important aspect to explore (California has its share of Reb and reconsidered landmarks — an hour south of Civil War Days, a local school district was in the middle of renaming their 19th century “Dixie School”).

Women aren’t left out of all the fun — some participate as soldiers and cavalry officers, some as nurses and surgeons, camp merchants, or as distressed civilians who run across the battlefield screaming after the first hail of bullets. 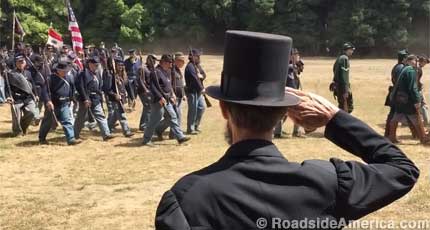