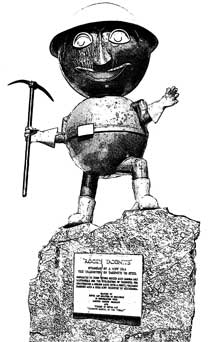 Rocky Taconite, the bulbous metalloid ambassador of Silver Bay, Minnesota, was unveiled as a 12-foot-tall statue in 1964. A few years later a local woman, Marie Benson, decided that Rocky would make a good bobblehead. It was bold thinking, because the modern bobblehead industry was still decades in the future.

Mrs. Benson had no access to injection molding, scanners, or machine tools. Instead, she made a rough model of Rocky in her kitchen using various items that she found around the house, including alphabet macaroni to spell out “ROCKY TACONITE.” She made a mold of her model, then made casts of Rocky in plaster, glued in a spring, and hand-painted every one.

Not many Rocky bobbleheads were produced, but their homely charm left a lasting impression in Silver Bay. 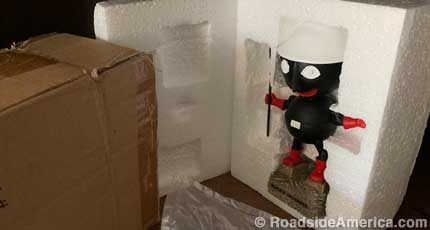 Fast forward to the 21st century. Ruth Koepke, vice-president of the Bay Area Historical Society, was a fan of Rocky — she described him as “a strange little rock man” — and remembered the bobbleheads. She believed that they were worth reviving. A professional company did the work this time, and the bobblehead was made available by phone order.

Despite his makeover, Wobbly Rocky had lost none of his so-weird-he’s-cute appeal. He became a social media celebrity, appearing in photos taken as far away as Vietnam and Australia, carried by people who had never been to Minnesota, or the U.S., and certainly not Silver Bay. 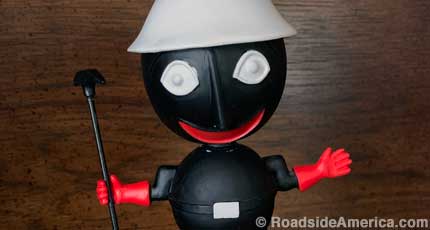 Today, Rocky Taconite is far better known as a bobblehead than as a statue, which is a shame since he’s a really great statue. The modern bobbleheads can be purchased through the Bay Area Historical Society at 218-226-4534.

Sections: Attraction News Comments Off on Rocky Taconite Bobbles On