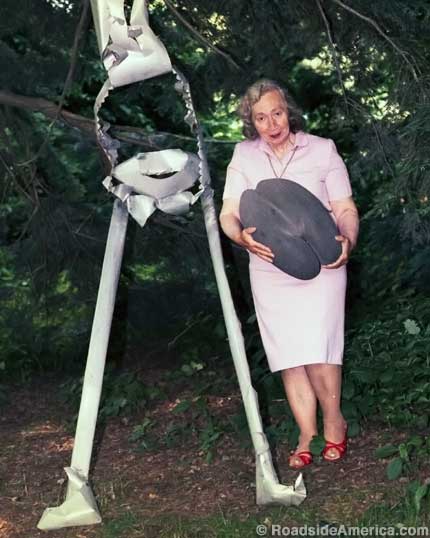 Elizabeth Tashjian, curator of the world’s only Nut Museum, has been gone for 12 years. But like a burst of fresh growth in the Spring, interest in the late, self-titled “Nut Lady” has revived — thanks to a retrospective of her nut paintings, drawings, and sculptures at the Cummings Art Gallery at Connecticut College in New London.

According to the gallery press release, the retrospective “recreates the Nut Museum’s main exhibition gallery [which was the Nut Lady’s dining room] with all of its original furnishings, art, and displays.” It also features a video compilation of Elizabeth’s many appearances on national TV, serenading Johnny Carson, David Letterman, Jay Leno, and others with her self-penned songs, “Nuts Are Beautiful” and “March of the Nuts.”

We know, we know… a roadside attraction without its charismatic owner is like a tree without a nut. But this is still a rare opportunity, for those too young or too sane at the time, to experience the Nut Museum — or at least as near an approximation of it as is possible — before it was closed and bulldozed in 2002.

The retrospective is scheduled to run through December 6.