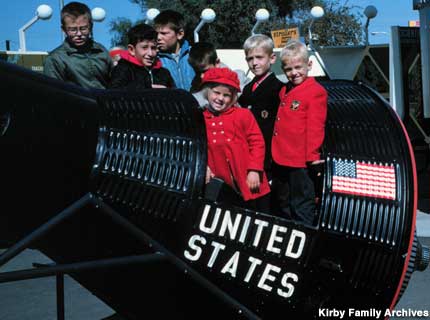 America’s 1950s-70s kids clearly had the wrong impression of when they’d be fitted for spacesuits.

The USSR and the USA were ideological competitors stoking space exploration excitement among their citizens. American schools and the media jammed wee developing brains with images of astronauts, and moon bases with cutaway glimpses of crew quarters, gyms, and play rooms.

It seemed it would be mere years between that first Moon footprint and the first smarmy lunar tourist “Wish You Were Here” postcard sent back to Earth.

Luckily, America’s mighty tourism and entertainment industries stepped in to distract us with space experiences on Earth. 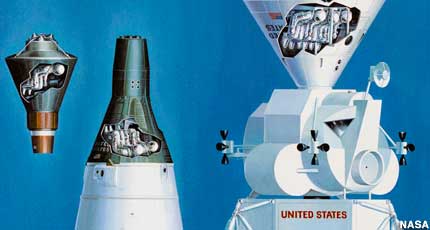 Fantasy trips to the Moon weren’t new — novelist Jules Verne wrote “From the Earth to the Moon” way back in 1865. The fringe fans of early 20th century SF pulp writers found their speculations becoming ever more relevant.

Meanwhile, in the real world, Robert Goddard blasted missiles into the stratosphere when cars barely traveled 40 mph. It was after World War II that advances in technology (and captured German rocket scientists) accelerated development of rockets capable of escaping earth’s gravity.

Science fiction movies throughout the 1950s amped up the scenarios (see the trailer for George Pal’s “Destination Moon,” which finishes by showing a pile of popular magazines containing stories about space travel). 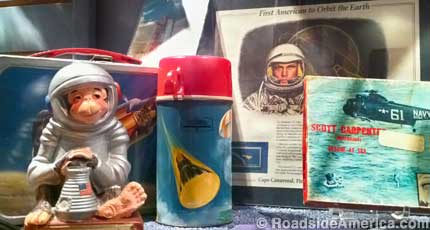 So it wasn’t much of a surprise when Disneyland opened its iconic space travel ride, “Rocket to the Moon,” in 1955, later upgraded to “Flight to the Moon,” then “Flight to Mars” (A near identical “Flight to the Moon” launched at Disney World in 1971). In 1959, even mini-golf attractions, such as Florida’s Goofy Golf, offered putters a space rocket hazard — on their way to the alien cyclops hole.

By the time of the New York World’s Fair (1964-65), NASA was done with Mercury missions, proceeding with Gemini launches, and deep in planning and testing for the moonshot. The Unisphere, the Fair’s central metal globe sculpture, featured paths representing the orbital flights of John Glenn, Yuri Gagarin, and the Telstar communications satellite. 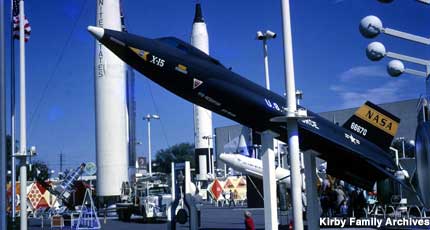 NASA’s Rocket Garden at the Fair let millions of visitors know, among all the international “Peace Through Understanding” exhibits, that everything was A-OK with the space program.

In the mid-1960s, the Kennedy Space Center was an essential Space Coast tourist destination, especially for families trekking to Florida from dozens of states to the north. The public boarded buses outside the sprawling installation, and enjoyed a narrated tour of the assembly, control and launch areas. The site was abuzz with activity, in preparation for actual launches. 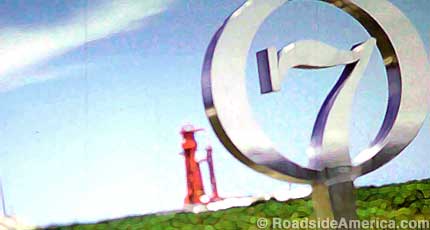 It’s expensive to visit today, but back then it was two bucks per adult. We found an old silent home movie of the bus tour in our scary archive of family films. Shot in early August 1966, you can see NASA workers in short sleeved white shirts, the Vertical Assembly Building (touted then as the “largest building in the world”) and an early Saturn V on the launchpad.

A couple of things to watch for in the film:

At one point, car traffic is backed up behind a huge rocket component on a trailer, stuck behind an overheated NASA security vehicle (Look for the brief shot of the truck with its hood up). The bus drives on the grass to get by.

Even NASA’s advanced design cylindrical porta-potties were a fascination magnet — and where kids could practice their own splashdowns. 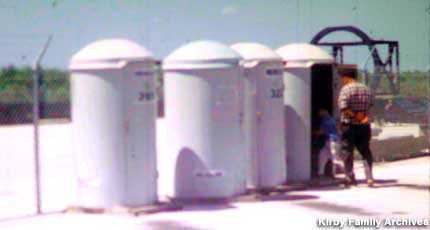 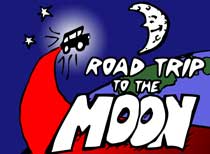 Sections: Rants, Video Comments Off on Space Travel By Car