When we last heard from California’s Confusion Hill — a mysterious place in Piercy where nature’s laws have turned topsy-turvy — the attraction owners were concerned that a new bridge would steer traffic away from its entrance. 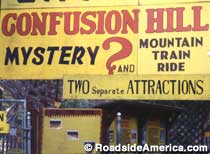 Those fears may now be behind them. According to the Santa Rosa Press Democrat, Confusion Hill is up for designation as an official California Point of Historical Interest. That may sound uninteresting, but it means that Confusion Hill gets both government recognition and an official highway sign next to the bridge’s off-ramp. This will make it once again visible to passers-by with limited vortex sensitivity.

No official highway sign can match the appeal of a really good billboard, but they are useful. The Center of the World has flourished in part thanks to its official recognition (and signs) from Imperial County, California. In contrast, Ohio’s ahead-of-its-time Titanic Museum flopped because its owner couldn’t convince the local government to put up signs for it out by the highway.

One frustrating fact about the Confusion Hill bridge is that it was built, according to the Press Democrat, to bypass chronic mudslides in the area. And yet Confusion Hill itself remains mysteriously unaffected! Instead of going to all of the trouble of building a bridge, California could have saved time and money by just re-routing the road closer to the attraction to take advantage of its evident shielding power.