DC: Don’t Know What It Is, Take A Picture Anyway 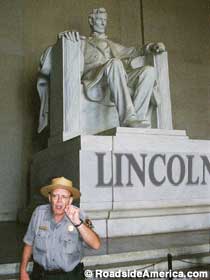 According to the National Park Service, many visitors to Washington, DC, “simply don’t know what they’re looking at” when they see the monuments on the National Mall. The Park Service wanted to install title signs to help the puzzled tourists (“Lincoln Memorial”) but the U.S. Commission of Fine Arts rejected the idea as unattractive.

The idea of people not recognizing the Washington Monument sounds ridiculous, but if they came from Ridgeland, Mississippi, they might justifiably think that it’s a cell phone tower. The only reason that we know what the White House looks like is because we’ve seen it a million times on TV. If we came from a foreign land, it might seem as puzzling as some of DC’s many genuinely obscure monuments that really could use a sign or two.

Maybe the National Park Service could use some of its money to put up signs in front of cryptic sights in other states? We’d love to read the official explanation of West Virginia’s Water Monster’s Daughter, or Illinois’ Baby-Making Boulder.

One Response to “DC: Don’t Know What It Is, Take A Picture Anyway”