The 7 Death Cars of Bonnie and Clyde 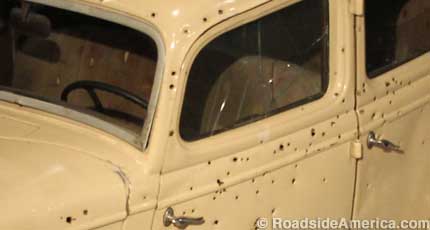 On our trip to the new Alcatraz East attraction in Pigeon Forge, Tennessee, we met an old friend: the Bonnie and Clyde Death Car from the 1967 Faye Dunaway/Warren Beatty movie.

We first saw it at the Bonnie and Clyde Ambush Museum in Louisiana; next it moved to the National Museum of Crime and Punishment in Washington, DC; and in late 2016 it relocated to its current home.

A Bonnie and Clyde Death Car is an iconic roadside relic, which explains why at least seven of them are currently on display in various American attractions: the real car, the movie car, and five fake cars (A sixth fake was destroyed when the Wax Museum of the Southwest burned in Grand Prairie, Texas). Others may be out there as well, hibernating in barns or private collections — and all that’s needed to manufacture a new one is a 1934 Ford, a big gun, and a lot of bullets.

Here’s our quick list of the seven tourist-accessible cars. Visit the one nearest you!

Real Death Car: Primm, Nevada
After years of being loaned out to other attractions, the real Death Car has remained parked at its home, Whiskey Pete’s Casino, on the plush carpet next to the main cashier cage, since 2012.

Vintage Fake Death Car: Roscoe, Illinois
We were told that this fake was parked next to the real Death Car while the fake was shot full of holes, to ensure the accuracy of the forgery. It’s now on display at Historic Auto Attractions, which acknowledges it as a fake.

Fake Movie Death Car: Las Vegas, Nevada
This lemon yellow fake appears to be a recent creation by car customizer Michael Dezer, who displays it as the Movie Death Car in his Hollywood Cars Museum. It’s not what it claims to be, but it’s still worthy as a symbol of the long-lasting love affair between America and Bonnie and Clyde’s gun-blasted, bloody Death Car.

Fake Death Car: San Antonio, Texas
In 2006 the Buckhorn Saloon and Museum added a Texas Ranger Museum to its attraction, with a replica Bonnie and Clyde Death Car as its centerpiece. According to marketing manager Karen Bippert, the museum assembled the car from parts purchased from catalogs and eBay, then had it painted to match the color of the original. Although its dozens of bullet holes look real, they were in fact painted on by an artist hired specifically for the job. [Thanks to tipster Gordon Melton for telling us about this car.]

One Response to “The 7 Death Cars of Bonnie and Clyde”