We were crestfallen when Dick Horne’s American Dime Museum closed in Baltimore in 2007. It was a unique showcase of the rare and ghastly. We thought we’d never again see priceless relics such as a Petrified Minotaur, or Abraham Lincoln’s Last Bowel Movement. 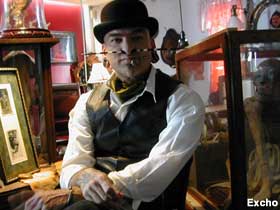 But it turned out that Dick had a friend and assistant: Peter Excho. Peter has now moved to Baton Rouge, Louisiana, and with Dick’s approval has opened Pexcho’s American Dime Museum in an appropriately eerie, mostly abandoned shopping plaza. Dick gave his blessing by mailing Peter one of his favorite Baltimore exhibits: a mummified cat.

Peter, who’s also an artist and a tattoo master, said that the museum’s hundreds of exhibits include shrunken heads, severed heads, and a two-headed mummy from Peru. “None of it’s made up or fake,” he insisted (frankly, we wouldn’t care if it was). “A lot of people will ask, ‘Is that a real head?’ And I’ll say, ‘Oh, absolutely!'”

In addition to the museum and a tattoo parlor, Peter’s establishment has a coffee shop that charges people by time. “Instead of small, medium, large, we have a half-hour, hour, and evening of coffee; all the coffee you can drink in that amount of time,” Peter said. He’d considered staging a “Coff-Off” drinking contest, “but we did a little research and found that you can die real easy. Forty cups and you’re done.”

Peter plans to rotate exhibits “just like a real museum,” and said that extra-special displays will have “premieres” in the coming months, such as an alligator man with his children, the petrified body of John Merrick (“The Elephant Man”) — and the last bowel movement of Abraham Lincoln! “That one will be in the Winter season,” said Peter of the Presidential poop. “I’ll let you know when.”