When Dino is Finito

The dinosaur behemoths of yore are long gone, and now it looks like our nation’s old timey dinosaur parks also face inevitable decline and extinction. 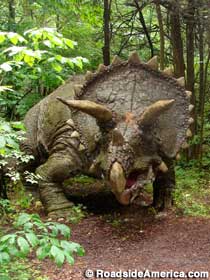 Many of these large-scale, scaly tourist destinations have closed in recent decades, leaving plaster, cement, and fiberglass giants stranded in forest and field, or stuffed into storage units ill-equipped to contain their majesty. (For the time being, state-of-the-art traveling animatronic dino shows such as “Walking With Dinosaurs” have nimbly managed to escape such a fate.)

The summer of 2010 is the last season for Prehistoric Forest and Mystery Hill in Marblehead, Ohio. Since 1953, this charming attraction has showcased unique, hand-built dinosaurs; a walk-through volcano; a rather non-related, gravity-defying shack; and one scientifically-out-of-place caveman who resembles a bloated Ringo Starr sporting a skimpy, ancient version of a boy scout uniform.

Current owners Denise and Len Tieman are throwing in the Tyrannosaurus so that Len (63) can enjoy his retirement years, which will include putzing around in his workshop making even more jumbo dinos, possibly for sale to the public. 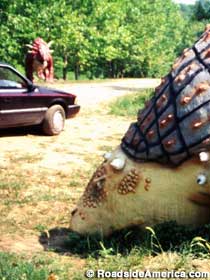 Dinosaur World in Beaver, Arkansas, opened in 1960 and closed in 2005, completing its reign as “the largest dinosaur park in the world”. Its stalwart creatures are made of concrete and were created by Emmet Sullivan (who is likewise responsible for the equally inspiring Christ of the Ozarks in Eureka Springs).

The park sat closed and neglected for years, and was recently named one of the “10 Most Endangered Roadside Places” in the country by The Society of Commercial Archeology. But don’t expect that press release to alter the evolutionary path of old-style dinosaur theme parks.

Another Prehistoric Forest — this one located in Irish Hills, Michigan — is defunct and currently for sale. With an asking price of $548,000, the 15-acres property includes a two-story waterfall, arcade, gift shop, “community shower building”, and, most enticingly, dozens of fiberglass dinosaurs and trees. Marketed as “prime commercial land on US-12” we hope that a white knight comes along so that the dinosaurs won’t be displaced or destroyed for something ultra-evolved like yet another mini-mall. 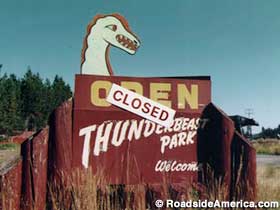 After failing in the 1990s, all that’s left of Thunderbeast Park in Chiloquin, Oregon is one curious, decrepit, and rather bear-faced creature holding court over Hub City Chrome.

And the fate of Dinosaur Adventure Land in Pensacola, Florida is currently in limbo. When in operation, the exhibits at this creationist theme park quite sincerely insisted that caveman and dinosaur roamed the earth together (and threw in Noah’s Ark for good measure). But soon this ambitious attempt at evangelical education was thwarted by the Internal Revenue Service.

In the summer of 2009 the property was seized by the government when founder Kent Hovind was found guilty of tax fraud. Son Eric hopes to raise enough money to buy it back. Ironically, you will note that your contributions to the cause are “tax deductible to the full extent of the law.”

Sections: Closing, Trends Comments Off on When Dino is Finito