Elvis Haircut Site To Be Preserved 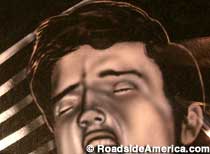 The Fort Smith Times Record reports that the reception center at Arkansas’s now-closed Fort Chaffee has been spared. More than just another anonymous base building, #803 was the site where Elvis Presley had his hair cut when he joined the Army in March 1958. The 50th anniversary of this event emboldened local historians to have the land surrounding the building rezoned from industrial to commercial, thereby sparing it from certain destruction.

A second article in the same paper reveals that the widow of the barber who cut Elvis’s hair still has the clippers that were used, and that another barber has the chair. Building #803 is expected to be restored within a quick six weeks, although the local group will “have to be cautious of how it markets the reception center because Elvis Presley Enterprises owns all rights to the Elvis name and image.”

Sections: Attraction News Comments Off on Elvis Haircut Site To Be Preserved