The Truth Is Out There Again: Elvis Is Alive! Museum Reopens 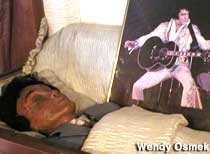 In 1992, Baptist minister Bill Beeny opened the provocative Elvis is Alive! Museum in Wright City, Missouri. It featured dozens of exhibits that proved, according to Bill’s theories, that Elvis did not die in 1977. But by 2007 Mr. Beeny was getting on in years, and he reluctantly put his museum up for sale on eBay.

Six hundred miles away in Mississippi, manufactured home salesman Andy Key saw the listing. Just for fun, he put in a bid for $8,300. To his shock, he received an e-mail from an Elvis fan later that week, asking him where he was going to move the museum and when it would be reopened. Andy had won. 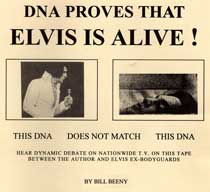 He could have pleaded insanity or ignorance and wriggled out of the deal. But instead, Andy followed his belief that “everything happens for a reason” and drove to Missouri to pick up his purchase. “The first time that I saw the museum was when I went to load it in the truck,” he told RoadsideAmerica.com. “Bill said that he was glad that a young fellah was taking over, to continue the work.”

Andy has done just that. He went home, quit his job, relied on the support of his patient and understanding wife (“She needs to be sainted,” he said), and spent six months moving the exhibits into a new building in Hattiesburg, Mississippi. On June 26 the Elvis Is Alive! Museum was back on the conspiracy map.

All of the old exhibits are here. So is the Elvis toilet paper in the gift shop, an item that Bill Beeny specifically requested that the Museum continue to sell. Andy, who was only eight when Elvis supposedly died, admitted that he “never really looked into” the possibility that The King might still be alive. But now that he’s become familiar with the exhibits, he’s a sincere believer. “There’s too many things that don’t fit,” he told us. “Something’s just not right.”

Speaking of mysteries, we wondered why Graceland hadn’t shut down the Elvis Is Alive! Museum, as it has other Elvis attractions. Andy told us Graceland’s position is that it has the legal right to protect Elvis’s name and image because he’s dead. “But we’ve got evidence here to show that he did not die,” Andy explained. “If Elvis is not dead, then they don’t have that authority.” 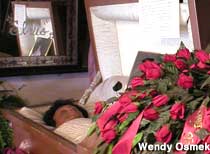 According to Andy, Bill offered to resolve the dispute in 1994 by digging up the body buried at Graceland and finding out if it was really Elvis. Graceland declined, and the two sides have coexisted ever since. “It helps that we don’t charge admission,” Andy added, “and everything that we sell is Elvis Presley Enterprises licensed.”

One new feature in the museum is a short-order grill. Customers can eat, according to the menu, peanut butter and banana sandwiches made from Elvis’s own recipe.

3 Responses to “The Truth Is Out There Again: Elvis Is Alive! Museum Reopens”