« Millennium Gate Finally Opens | Main | The Truth Is Out There Again: Elvis Is Alive! Museum Reopens »

Eternal Flame Gets One More Year (At Least) 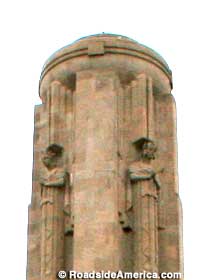 This has been a banner year for the National World War One Museum and Liberty Memorial in Kansas City. First the Museum finally acquired a World War I tank. Then it was finally visited by a World War I veteran. And now comes a report that the Eternal Flame atop the 217-foot-tall Liberty Memorial Tower will glow for another year.

The Flame is not really a flame; it’s orange and yellow spotlights trained on a column of steam that rises from the top of the Tower. It’s not eternal, either; it’s been out several times since the Tower was dedicated in 1926. The last time was in March of this year, and that’s because the Memorial deliberately shut it off in protest when it learned that the mayor was cutting its budget by $620,000.

Local businesses and citizens donated enough cash to turn the Flame back on and keep it steaming through July 4. And now comes word that a new fund-raising effort has brought in enough cash to maintain the Flame through Independence Day of next year. Everyone seems pleased with this result, although some locals are ready to throw the off switch if taxpayers ever again have to foot the bill.

Flame has been a mortal enemy to many Roadside attractions. But this one, the biggest and fakest and most expensive of all, really should be kept going. Yes, it’s an extravagant use of energy, but far less than, say, a 3-day artillery barrage on Ypres, or 3 minutes in Iraq. The cost of war is always greater than the cost of electricity to power attractions that remember war and honor our war dead.

One Response to “Eternal Flame Gets One More Year (At Least)”