In 2009 the city of St. Helens, Oregon, received a small grant to create something that would draw visitors off the highway and into downtown. Avoiding the predictable sign or billboard, St. Helens came up with a novel idea: a miniature version of its namesake, the volcano Mount St. Helens. It would include a fountain that would erupt water every 15 minutes. 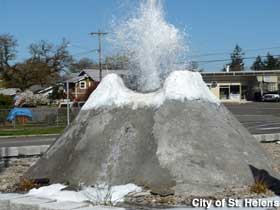 “Everyone liked the idea,” said city administrator Chad Olsen. “Then they went out and built it. And the next thing you know, people were yelling.”

They were not yelling with  joy.

What St. Helens got for its money was a five-foot-tall gray mound of cement with a cone on top. It was denounced as a “buffoonish monstrosity” and “pile of dung” in a newspaper op-ed and on a Facebook page created expressly to attack it. “A lot of people said it looked like something that their middle school kids would put together as a class project,” said Chad.

There were other problems. Electricity was needed for the eruptions, so the power company installed a pole with a big meter — right next to the volcano. Then the water compressor blew. A replacement was purchased, then it blew. Chad conceded that the 15-minute schedule was perhaps too rigorous, and might be scaled back to once an hour.

But he’s not willing to concede that the volcano is bad for St. Helens.

“We were having a discussion, and we started to talk about the Giant Balls of Twine,” Chad said, “and I thought, you know, this could be the crazy oddball thing that people stop and look at” (He cited local examples such as the caveman in Grants Pass and the hairball in Mount Angel). The power pole could be moved, said Chad. Plants could be added to make the volcano more attractive. Instead of “just complaining that it’s butt ugly,” Chad said, the city could work to make its new addition better.

Directions:
The town bulldozed the volcano in mid-October 2010.
Status:
Gone