« Mascot War? We Want Angus On Our Side | Main | St. Helens: Fickle Support for Town Volcano »

Historically, relations between native peoples and the city of Tacoma, Washington, have been downright unpacific at times. That’s apparently in the past now that a 20-foot-tall Coast Salish woman, carved from wood, has been unveiled as the city’s unofficial greeter. 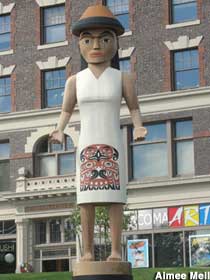 The unnamed statue, wearing a traditional cedar hat and a Thunderbird dress, holds out her arms in welcome. It began as an idea for a totem pole ten years ago, but over time the design changed, and grew. The statue stands downtown, on the site of a former Puyallup tribal village. According to the Tacoma News Tribune, those who attended its two-hour blessing ceremony received souvenir wood shavings.

As tall as it is, even a 20-foot statue will suffer from grandeur-deficit-disorder when placed among downtown office buildings, and subjected to the usual shoe mirror shenanigans that befall large statues wearing skirts. But it’s still a welcome addition to the landmark landscape.