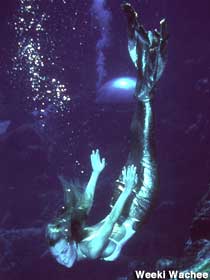 After five years of hard work and occasional fin-biting, the City of Mermaids has officially become a state park of Florida.

Weeki Wachee, whose lovely mermaids lured tourists for decades to the left coast of the Sunshine State, had fallen on hard times. Infrastructure was crumbling, attendance had dropped, an alligator menaced the mermaids. There was talk of pulling an Aquarena Springs and simply letting the place go back to what it had been circa 1945: just another Florida water hole.

But the mermaids did not go quietly, and the state eventually recognized that Weeki Wachee’s unique contribution to Florida culture was worth saving.

Long-term plans by the state are still unclear. “We don’t plan on making any dramatic changes for now,” said a Parks spokesperson in Hernando Today, a reassurance that sounds a little fishy. But any proposed changes would now have to clear a number of public hearings, so it seems that Weeki Wachee’s mermaids have dodged a harpoon yet again. And they’ll qualify for low-cost dental insurance as well.