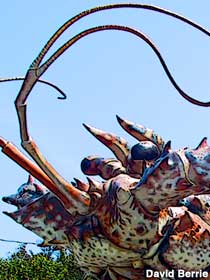 Think for a moment how much a dish of Lobster Wellington or Lobster Newburg costs — with just normal-size lobsters. How much would you pay for one 35 feet long and 25 feet high?

“Big Betsy” for years guarded the entrance to Treasure Village in Islamorada, Florida. But the Village closed in 2007, and Betsy disappeared in 2008. Now she’s for sale on eBay, with bids accepted until midday November 13, and a Buy it Now price of a quarter-million dollars (Interested shoppers should visit the site and type in “giant lobster”).

A quarter-million dollars may seem like a lot, given that scary skeleton statues and even entire museums go for a fraction of that price. But Betsy’s eBay page makes the argument that she’s hurricane-proof (unlike lobster inflatables) and that she “paid for herself within a year and a half” by enticing customers.

A lot of out-of-work bankers and brokers are supposedly moving to Florida; maybe one of them can trim a piece off of his or her golden parachute and purchase Betsy. She’s too good to be kept out of sight, and the World’s Largest Lobster title shouldn’t go elsewhere by default — even though the eager-beaver Canadians are already claiming it.

86700 Overseas Hwy, Islamorada, FL
Directions:
US-1, milepost 86.7, southbound side, in front of the Rain Barrel Artist Village.
RA Rates:
Worth a Detour