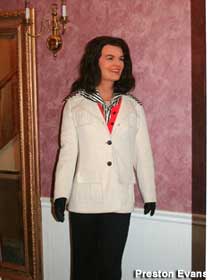 “Wax museums never die; they just move to another city,” said Mark Pedro, art director for Christ in the Smokies Museum. He was talking about his own museum, which replaced a wax museum whose dummies moved to Tampa, and whose own dummies came from a closed wax museum in Hollywood — but the sentiment is universal.

Custom wax dummies are too expensive, and too appealing as an attraction, to be thrown away. When a wax museum closes, the figures are bound to end up somewhere else.

That reuse – recycle ethos has made possible the new Follow The Leaders Wax Museum in Warm Springs, Georgia. Its dummies had only been out of circulation for a few months. Their former home, Mammoth Cave Wax Museum in Kentucky sold off its collection of Presidents, religious figures, and celebrities in May — and by Labor Day many of them were on display in the new museum in Georgia.

Preston Evans had traveled to Kentucky because he wanted to buy the FDR dummy for a museum he already ran in Warm Springs (President Roosevelt frequented the Little White House in Warm Springs). But when Preston arrived, he realized that he liked a lot of the other dummies as well.

“I had a property in Warm Springs that I wasn’t doing anything with,” he said, “and I thought, ‘I could open a wax museum!'” Preston wound up buying 34 of Mammoth Cave’s 65 dummies.

Preston got his FDR, but also most of the Presidents from Teddy Roosevelt to Jimmy Carter — and many of the other classic figures, including Bobby Kennedy in crazy checked pants, Davy Crockett holding a log, Albert Einstein with his wax neck signed by Albert himself, and Dolly Parton, probably the newest figure of the entire wax menagerie, which gives a sense of just how old they are.

Preston was delighted to acquire the autographed Einstein — a unique dummy — and also the grinning Neil Armstrong, who is nearly unrecognizable out of his moon suit. “I’m lucky I got him,” said Preston. “I’d rather he was still around, but I bet he’s worth three, four times as much now.” The moon rock formerly in Armstrong’s hand is gone, but Preston promised to consider replacing it (It really would make Neil a lot less anonymous). And Preston said he still hoped to acquire Mammoth Cave’s wax Last Supper, which is being sold as a set, and its Marilyn Monroe. 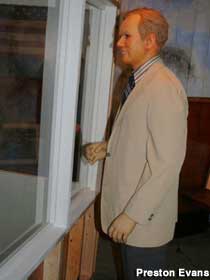 Preston, a semi-retired auctioneer (“I quit for about four days”) said that his various Warm Springs museums keep him young (he’s 69) and that his dummies now have a good, long-term home. “They’ll be there when I’m 109,” he promised. Whatever wax museum owner gets them after that will no doubt be just as happy as Preston, although they may have to install wheelchair ramps for the Dolly Parton fans.

Sections: Attraction News Comments Off on Follow The Wax Leaders — From Kentucky To Georgia