Photojournalist Phil Pasquini, a longtime tip contributor to RoadsideAmerica.com, is the author of “Domes, Arches and Minarets: A History of Islamic-Inspired Buildings in America.” Phil spent four years crisscrossing the US to research and photograph hundreds of eclectic structures of an underappreciated architectural style. America’s oldest example is the Alamo, built in the 1700s in a Moorish style by Spaniards. 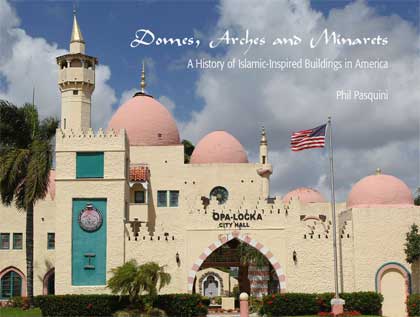 Through Pasquini’s discerning lens, we see that examples of Islamic architecture in America are more common and varied than we previously realized — from an armory in Georgia, a strip club in Los Angeles, to the civic center Frank Lloyd Wright designed for Marin County, California. Its distinctive flourishes, lines and character grace many historic government buildings, churches, synagogues, and mausoleums.

To real aficionados of Islamic architecture — say, someone from the Middle East — America’s crazy mosaic of design elements might appear ridiculous. They’d be right, considering how the cultural transfusion occurred. 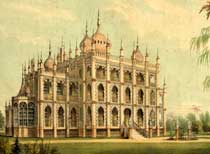 Rich Americans traveling the world would see landmark temples; they’d come home and order their builders to get working on doorway arches and Turkish domes. Literature and Hollywood movies also greatly affected depictions of the Middle East. And millions of Americans got a taste of “the streets of Cairo,” a popular and recurring attraction at World’s Fairs, according to Pasquini.

Perhaps the most bizarre sources for Islamic architecture in the US were the shriners. Formed in the 1870s, the Ancient Arabic Order of the Nobles of the Mystic Shrine was neither ancient nor Arabic; it was a couple of guys forming a secret society for fraternal fun. We think of them as the fez-wearing, tiny car-driving comic relief in the town parade, but they built many grand Shrine Temples in the Islamic style. 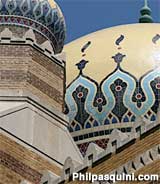 Companies were also attracted to the style for use in corporate buildings. Sparkletts Drinking Water Corporation adopted a Moorish Revival design for their headquarters in Los Angeles (1925-1929). Phil notes that the building’s two minarets were damaged in a 1971 earthquake and were dismantled, but the remaining structure of white walls and domes is “of a serene Middle Eastern building set down in the middle of a busy commercial area.”

The city of Opa-Locka (featured on the book’s cover) was transformed by Islamic architecture. Built during the Florida real estate boom of the 1920s, Opa-Locka’s vision was probably inspired by the book “The Arabian Nights.” The city has numerous Moorish Revival homes and a stunning city hall, with pink domes, parapets, and minarets.

In 2010, we teamed up with Phil (and his journalist wife, Elaine) to take a tour at Fort Irwin, where the US government constructed over a dozen fake Iraqi and Afghan villages for use in troop training. A few photos Phil shot there are in his book. Great images, illuminating a sobering new use for an architecture style that has been welcomed into America for four centuries.

Sections: Books Comments Off on America’s Domes, Arches and Minarets