Like Florence, Italy, in the Renaissance, or Los Alamos at the dawn of the Atomic Age, the Hollywood Wax Museum in Pigeon Forge, Tennessee, is an incubator for radical ideas. Its creators, who own several wax museums, have pioneered new approaches to the old-fashioned wax museum, with an emphasis on touching, sharing, and swapping. 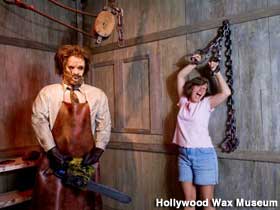 We spoke with Tej Sundher, grandson of Spoony Singh, who opened the first Hollywood Wax Museum (in Hollywood, California) in 1922. The Pigeon Forge version opened in May 2012.

We were guessing that some magical new wax chemistry made possible the switch from hands-off dummies to the modern kind, which visitors can touch and grope as if they’re real. Not so. “Wax figures haven’t changed in hundreds and hundreds of years,” Tej said. What’s changed is the calculation that the profits to be made from letting people touch dummies will exceed the costs of repairing them (Hollywood Wax Museum began trying it in 2005). “It’s worth the tons of labor and expense,” said Tej. Custom wax figures cost tens of thousands of dollars apiece, so this path can only be taken by museums with deep pockets. 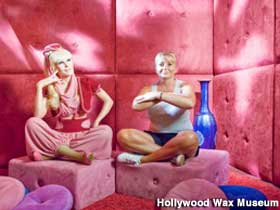 Pigeon Forge’s Hollywood Wax Museum is also novel in that its dummies are designed to be swapped in and out quickly, and to look good on smart phones. The displays are kept simple: the dummy, a few props, and a hi-res photo backdrop that gives the illusion of 3-D. Visitors take snapshots of themselves or their friends posing with wax superstars, then download the photos to their Facebook pages. “They photo-document everything in this museum,” said Tej. “People love it. They can take things from this world and put it in their virtual world.”

But who decides which stars shine and which flicker? “I have stats on a daily basis of what’s going on,” said Tej. Every visitor to Hollywood Wax Museum is asked which dummies they liked best and which new ones they’d like to see. Some have surprisingly long shelf lives, such as Forrest Gump and I Dream of Jeannie. Others fade away only to reappear. “Michael Jackson,” said Tej. “He always trended big, but his revival since he passed? Amazing.” 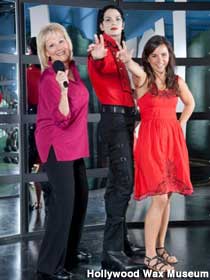 Tej uses the word “relevant” to label those worthy of a spot in Hollywood Wax Museum. “The public defines who is relevant, and we listen,” he said. There is, however, a governing board (Tej and four other family members) who review the data and make the final call. “One of our factors is longevity,” Tej said. “Not many reality stars have longevity.”

We asked Tej if any TV or movie studios had contacted Hollywood Wax Museum to see who was hot and who was not, or if any irate celebrity had demanded to know why they were no longer a wax-worthy star. Tej said no, of course. That’s the answer we’d expect from someone who wields such fearsome power.