Hydrogen Bomb vs. Twine Ball: Which is Scarier?

Museums, by tradition and by design, are places to safely view civilization’s deadly achievements and excesses. Many museums strive to get visitors up close to weapons — artillery, grenades, aircraft, poison delivery systems. Military hardware and ordnance is nearly always rendered harmless for exhibit — barrels plugged, triggers welded, shells dummied — which leaves it to the visitor to imagine how it would be to aim or fire or be hit on the head by one. 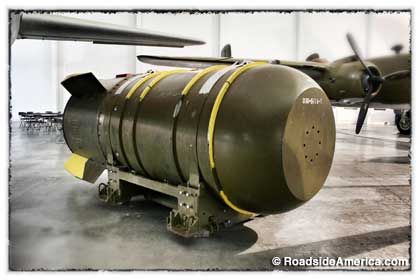 Curators carefully consider exactly how much to explain, or not explain, about their death-dealing displays. We’ve seen it done with varying degrees of success. One collection may be jam-packed with typed signs detailing too much. Another may throw a single item into a black-walled room with a spotlight, where it becomes a vague piece of art. Ick.

One particularly terrible WMD that we spy surprisingly often in a range of museums (such as Strategic Air Command, the Atomic Testing Museum, even the Army Engineer Museum) is the nuclear bomb. Although usually accompanied by a plaque declaring it to be a replica, or a casing of a Mark 4 or a Mark 36 or whatever, these things are instantly recognizable. They need no explanation, or horror movie lighting; it’s all in the mind.

H-bombs induce a sort of mental flinch as you envision what would happen if you were standing next to a live one when its genie was let out of the bottle, granting a million sunny day wishes in a millisecond. 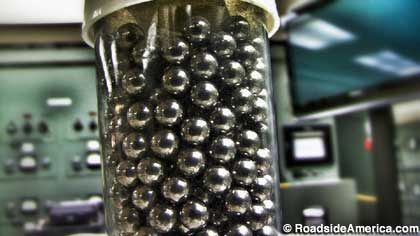 Nuclear reactors, while much larger, don’t exude the same sense of violent vaporization. They don’t feel safe, to be sure, especially when your tour group has to pass through a body scanner just to get onto the property. Our invisible nemesis, Mr. Radiation, with his many centuries of half life still left, chortles at our tiny cache of Boron Balls. But unsettling is not the same as terrifying — and it’s hard to beat a Fat Boy or a Little Man replica when it comes to imagining the unimaginable.

Which brings us to Giant Twine Balls. Don’t let their nutty, woolgathering PR fool you. While they’ve never been developed as offensive weapons, America’s largest balls of twine possess their own palpable field of potential energy.

Just stand next to one and you can feel it. Not replicas. Real. 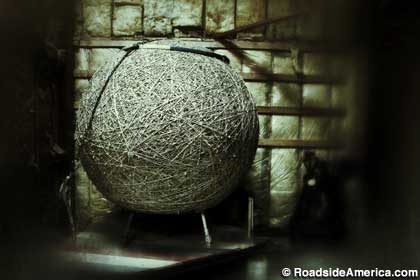 Twine Balls are relentless, unilateral efforts, often carried out in secret over decades (Sound familiar?), as impressive as any city-smasher hydrogen bomb. Imagine one breaking free from its restraining shackles, gathering speed, rolling downhill toward an unprepared town.

Ground Zero, Main Street, USA? It could happen. Do you know what is at their core? We sure don’t.

Sections: Rants, Trends Comments Off on Hydrogen Bomb vs. Twine Ball: Which is Scarier?