Gary, Indiana is unlikely to make anyone’s list of the world’s most idyllic vacation spots. But two enterprising Chicago entrepreneurs have convinced scores of music-loving tourists to undertake a four-hour peek at the bleak by booking a spot on their “King of Pop Hometown Tour.” For $55 per person, Michael Jackson fans can visit the drab and dire former steel town, which admittedly lacks the absurd glitz and glamor of Jackson’s later residence, Neverland Ranch. 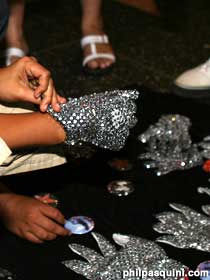 The tour’s highlights include a modest two-bedroom bungalow where the 11-member Jackson family lived an ambitious, sardine-like existence; the local hospital where Jackson was born; an elementary school; the steel mill where motivational dad Joe worked; and, for now,  Mr. Lucky’s Lounge (which may be eventually sold off brick-by-brick by its current owner).

These days, the former Jackson home is overwhelmed by mounds of handmade cards and stuffed animals, but no one is allowed inside. King of Pop tour attendees can, however, visit a similar home across the street if they wish to get a visceral feel for the cramped quarters where Jackson’s career as a musical innovator and leading eccentric was launched.

As is to be expected, plans are underway to commemorate the Gloved One in a more ambitious and permanent fashion. There’s been talk of a museum, a monument, a hotel, and a Performing Arts Center. Ten acres have been donated by the city, fundraising has begun, and vague plans have been made. Colorful patriarch Joe Jackson is involved. (Uh…bad idea?)

If you’d like to seek out other sad childhood abodes, we suggest a trek to the birthplace of Angie Dickinson in Kulm, North Dakota (which doesn’t even rate a plaque), or the nearly-deserted Ludwig and Christina Welk Farmstead in not-so-nearby Strasburg, North Dakota (a small town that Welk could not wait to escape from at age 21), or perhaps Bob Dylan’s former residence in far-flung Hibbing, Minnesota. (You can’t go inside but you can drive by. There’s also an exhibit in the Hibbing Public Library which features an awkward paper maché Zimmerman figure. Visitors are encouraged to pose with it.) 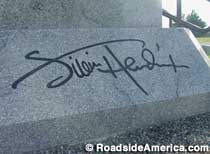 But the award for most depressing childhood home has to go to the now-destroyed boyhood home of Jimi Hendrix. Despite being not much to look at in the first place, its fortunes fell even further when it was bought by a real estate investor and moved to Hi-Land Mobile Manor, where it entered a period of neglect and mismanagement, deteriorating into a boarded-up eyesore until the city of Renton, Washington finally insisted that it be demolished.

You can, however, still visit Hendrix’s grave. Like the house, Jimi’s body was moved from its original location (back in 2002) but arrived at a happy ending when it was reburied under a permanent marble-domed monument. [Post by Anne D. Bernstein]

Sections: Attraction News Comments Off on Down Towns: Gary, Indiana as Tourist Mecca