In a far corner of Wild Bill’s Nostalgia Center, if you can squeeze your way past his collection of 500 hand-painted Lithuanian trolls, and his case of giant trilobites from Morocco, you might be able to wedge open the door into his office.  “Be careful,” Bill cautioned as we entered.  “It’s kinda packed.” 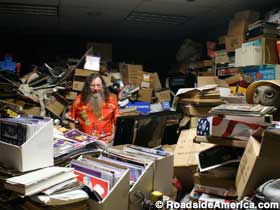 Bill’s office is the ultimate personal cave.  It used to be the bar for the nightclub that Bill now uses as his store.  It has — or had — lots of room, but Bill has filled every square inch of it.  “Kinda move around here, if you can,” Bill said, sliding past a pile of rock ‘n’ roll bumper stickers.  “Just watch yourself….”

“I have a picture of Arlo Guthrie here,” said Bill, pointing to a publicity photo of the 1960s folk singer.  “He was teaching English at Wesleyan, and I figured that if he ever came in I could get him to sign it.”

We didn’t want to injure Wild Bill, so we stayed just long enough to understand that there are strata of things in Bill’s office — a Wookiee head atop a box of disco albums atop a vintage Macintosh computer atop a 1980s video arcade game.  “It’s mostly my stuff,” he said.

Wild Bill pointed to a map of the U.S. riddled with pins, hanging from an unreachable wall.  “Those are all the stores that we sell to — or sold to,” he said.   “How long has it been since you updated it?” we asked.  “Probably six years.”