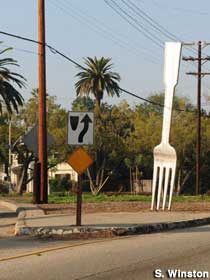 Recently a giant fork appeared on a traffic median in Pasadena, California. No one seemed to know who was responsible for the guerrilla installation of the 18-foot-tall rogue utensil; city official said that no permits has been issued. The shiny structure remained cryptic cutlery until a man named Ken Marshall fessed up and admitted the sculpture was a prank meant to honor the 75th birthday of his friend, Bob Stane (who owns the Coffee Gallery in nearby Altadena).

It turns out that a small crew of well-wishers, dressed as Cal-Trans workers, dug a hole in the night and “stuck a fork in it,” then the artwork was secured in a concrete and steel bed. Marshall said that he cooked up the idea, inspired by the way that he and Stane often brought up how amusingly awesome it would be to see a literal “fork in the road.”

We assume that these punning pals were unaware of a similar roadside gag that was realized across the country in Red Hook, New York. That variation-on-a-theme is helpfully labeled “Fork in the Road” — just in case someone didn’t get the joke. It was created by artist Stephen Schreiber, who also installed a giant Prozac Pill on a nearby lawn. That pharmacological wonder sports a sign that reads “Don’t Worry. Be Happy.”

Other notable examples of silverware on steroids include the “World’s Largest Fork” in Springfield, Missouri, which once stood in front of a now-shuttered restaurant and currently spruces up the parking lot of an ad agency (proving that putting the World’s Biggest Something in front of your place of business is no guarantee of success); the Giant Meat Cleaver of Topeka, Kansas; and Claus Oldenburg and Coosje van Bruggen’s “Spoonbridge and Cherry” at the Walker Art Center in Minneapolis.

Not to mention a 14-foot World’s Largest Purple Spoon that beckons shopper to drop some dough at Wagner’s Wondrous Wands and Spiral Spoons Gift Shop in East Glacier Park, Montana.

Back in Pasadena, Marshall has stated that he wants to donate his giant fork to the city and hopes it will become a permanent fixture. We support this endeavor, as the fork is certainly a feast for the eyes. [Post by Anne d. Bernstein; thanks to S. Winston for the photo]

One Response to “Giant Forks: Sign of the Tines”