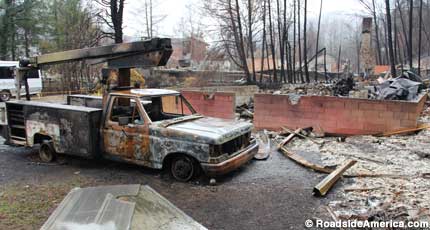 A firestorm destroyed parts of the tourist town of Gatlinburg on November 28, 2016. It resulted in over a dozen deaths, was devastating for homeowners… but did it destroy Gatlinburg’s array of roadside attractions? Many early reports were confusing and contradictory, so we decided to eyeball this Great Smoky Mountains mecca in person. 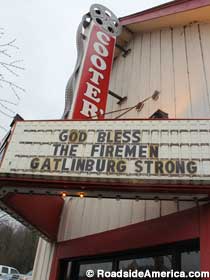 We visited in late December, on a cold, rainy, midweek afternoon. We expected to find the town in post-inferno hibernation — and instead slammed hoodfirst into Gatlinburg in full midsummer form; traffic gridlocked, sidewalks packed with tourists, no place to park.

Various businesses had created “Gatlinburg Strong” and “Mountain Strong” signs to express their tenacity: one was on the marquee outside Cooter’s Dukes of Hazzard Mini-Museum, another hung from the top of the Space Needle. 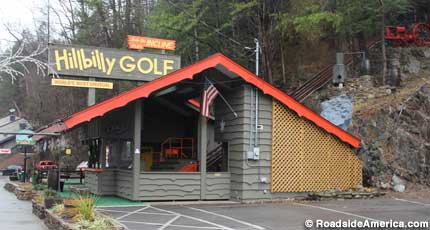 We were more concerned with attractions on Gatlinburg’s outskirts, where the fire was the most intense. Hillbilly Golf (initially reported destroyed) was closed, but it seemed more because of the rainy weather than fire damage. If anything was burned, it must have been high up the hillside among the golf holes. 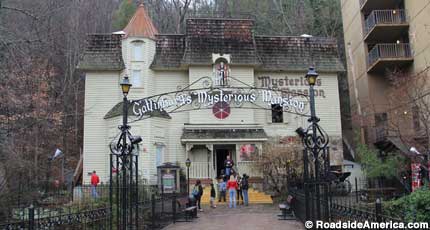 Business was brisk at the Mysterious Mansion, which had at first issued sad farewells on Facebook after hearing reports that the building had been destroyed. The only damage turned out to be a slightly scorched roof. We were told that on the night of the blaze the Mansion’s manager sprayed fire suppressant around the property, and that’s what kept the flames away.

A higher power was credited at the Museum of Salt and Pepper Shakers, where the fire gobbled up cottages only a few hundred feet away. “It’s like God put a dome of protection over us,” we were told, although the home of the attraction’s owners was completely incinerated. 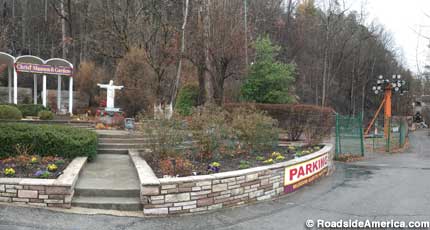 Similar credit was extended at the Christ in the Smokies Wax Museum, where the fire reduced the River House Motorlodge next door to a blackened ruin. “We were truly blessed,” we were told. The only damage in the museum was to its heavy draperies, which had to be cleaned to get out the smoke smell. Even the museum’s heat-sensitive wax dummies were unaffected. If Gatlinburg had one potentially flammable attraction whose escape best met the qualifications for a miracle, this one was it.

US Hwy 441, Pigeon Forge, TN
Directions:
I-40 exit 407. Follow the attractions south, first on Hwy 66, then US Hwy 441. Roughly 15 miles south to the heart of Pigeon Forge, then another seven miles to Gatlinburg.
Admission:
Free to visit, admission for tours
RA Rates:
Major Fun