Pilgrim’s Pride is moving. Pilgrim’s Head is not.

That’s the news from Pittsburg, Texas, where Pilgrim’s Pride (the chicken company) is packing its corporate headquarters and moving it to Colorado. 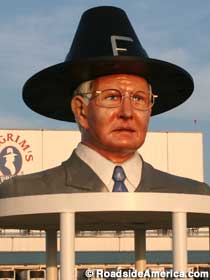 Pilgrim’s Pride went bankrupt in 2009, blaming it in part on the soaring cost of chicken feed, too many chickens, and not enough chicken-eaters. In desperation, the company sold itself to beef and pork giant Swift & Company. Part of the deal was that Pilgrim’s Pride would move its chicken brain trust from their home in Pittsburg in east Texas to Swift’s headquarters in Greeley, Colorado.

We were alarmed by the news, knowing how once-revered giant symbols of subsumed corporations are often demolished or shuffled off to permanent away-from-the-public storage.

Pilgrim’s Pride’s VP Gary Rhodes told us quit worrying — most of the company’s operations would stay in Pittsburg, including its huge freezer building and the giant head in front of it.

Transplanted Pilgrim’s Pride executives will no longer be able to gaze out their office windows and see Bo Pilgrim’s giant head staring back at them — but maybe that’s what distracted them from staying in business in the first place.