Vacation on Mars? Yes you can, and you can start as early as August 2012! 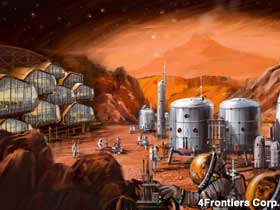 At least that’s the plan behind Interspace, an attraction that will break ground later this year in Titusville, Florida. The 70,000-square-foot facility will have “the largest indoor simulated Mars environment anywhere on the planet,” according to VP of Operations and R&D Joe Palaia.

“Vacation” may be too tame a word. Joe described what visitors should expect: “In the not-too-distant future we’ll have a settlement on Mars. People will already be living there” — in this case, the Interspace staff — “and our 50 guests have just arrived. We’re going to show them their new home, and they’re going to get right into rolling up their sleeves and getting their hands dirty doing their jobs on Mars.”

Joe described this three-to-four-day “experience” as a combination Dude Ranch and Murder Mystery Train Ride, with the rougher edges of space living smoothed away. “There’s not going to be a real vacuum out there,” he said of the simulated Martian surface. “They’re not going to be eating food from a toothpaste tube.” 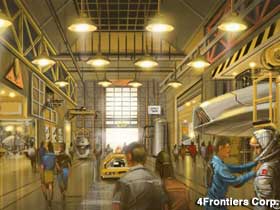 In fact, part of the purpose of Interspace is to show visitors that life on Mars can be pleasant, thanks to the technologies that Joe and his team will develop with the money spent by visitors to their attraction. “For us this is a means to an end,” said Joe, speaking for his development team. And Joe and his partners don’t just plan to make stuff to sell to Mars-bound colonists. “We want to go to Mars. We want to settle the planet ourselves.”

Joe shrugs off those who consider him crazy. “I’m sure that they called Columbus and Magellan crazy too.”

Visitors who choose not to immerse themselves in Martian living can watch the others from a corridor that will encircle the Mars simulation. “They can put their nose against the glass and see the multi-day visitors out there on the surface in a space suit or working inside the habitat,” said Joe. When we mentioned the failed Biosphere 2 to Joe, he acknowledged the similarities but said that the Arizona human fishbowl-biosphere wasn’t built as an attraction and didn’t have an address in tourist-packed Central Florida.

Joe said that when visitors end their Martian stay at Interspace, they’ll likely be confronted with a challenge that they’ll have to overcome as a team. “We’re going to avoid the monsters and aliens if we can,” he said. “We want people to walk away saying, ‘Wow, I really could do this.'”