City council members in the Southern California town of Bellflower are hoping that the “fingers of God” will attract foot traffic to their downtown district this summer. They recently approved the temporary installation of Invitation/Decalogue, a 26-foot-wide, 15-foot-tall fiberglass sculpture by Romanian artist Liviu Mucan, which is intended to represent God’s hands and The Ten Commandments (but also resembles the giant emerging claw of some sort of lizardy underground monster, or perhaps an over-sized, upside-down version of the classic arcade staple “teddy picker”) 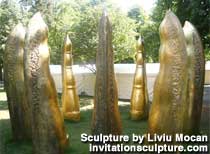 These evocative striving digits were first on view in Cluj Napoca, Romania (the artist articulates his vision in this video, as opening day visitors sip wine in the background). Then it moved on to a limited engagement in Geneva, Switzerland, and now the non-profit church coalition “Kingdom Causes Bellflower” has raised $12,000 to ship, install and maintain this colossal circle of columns.

Invitation/Decalogue is just the latest manifestation of a popular theme in roadside art: gigantuan emerging body parts. J. Seward Johnson’s The Awakening is probably the most notorious example. And Possibly-The-World’s-Largest-Christ in Monroe, Ohio, stuck halfway on its journey from earth to the heavens above. (Not to mention assorted praying hands that pop out of the ground along our nation’s byways…)

The monstrous and metaphorical Invitation/Decalogue will be on display from June 24-August 31, perched upon a parcel of city property along Bellflower Boulevard, inspiring both spirit and shopping in suburban Los Angeles. [Post by Anne D. Bernstein]