Goonies in the Boonies 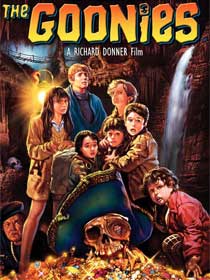 Astoria, Oregon is not only “the former canning capital of the world” but also has a claim to fame as a movie location for many scenes in the 80’s kid adventure film The Goonies. Now Astoria is looking to cement its place in pop culture history by hosting a 4-day festival commemorating the 25th anniversary of this tale of treacherous, trap-infested treasure hunting.

From June 4-7, fans can visit Goonies hot spots, including the Goonies house, jail cell, bowling alley, and — if you are willing to drive 30 miles to Cannon Beach — “the rock with a hole in it”  (now known as… Goonies Rock of course.) There will be a red carpet screening of the movie (we wonder if the town has its own carpet or if it has to borrow one), the grand opening of the Oregon Film Museum (housed in the old county jail), and a concert featuring Corey Feldman’s “Pink-Floyd inspired” band, Truth Movement (Fellow cast members Jeff Cohen, Joe Pantoliano, and Curt Hanson will also be on hand for fawning and flashing cameras). Special Goonies beers and collectible doubloons will be created for the occasion.

Over in the far smaller Oregon town of Brownsville, a rival ’80s youth bonding feature will be feted on July 24th at the 25th Anniversary of Stand By Me (They’re fudging a bit since it came out in 1986, but was filmed in 1985!). So far, no cast members are booked for a visit, but there will be Hot Wheels races and a blueberry pie eating contest. Relive poignant scenes of wry humor with a self-guided tour of locations, including the “Leech Infested Swamp.”

Oregon’s role as a backdrop for coming-of-age classics continued well into the 2000’s, when the Twilight movie was shot in Kalama. But, in this case, the town of Forks, Washington (where the books were set) has hijacked the hype. They take their vampire tourism seriously with multiple photo ops (including Dr. Cullen’s parking spot), regularly scheduled tours, and a theme menu at the Three Rivers Resort (werewolf burger and vampire shake, please!) If you’re on a budget, the local Subway franchise offers a “Twilight sandwich” (roasted chicken, ham, bacon and marinara sauce).

But if you really want to pay tribute to the state’s historic role as youth rebellion movie mecca, you might consider purchasing The Dexter Lake Club (currently offered at $349,000), which was host to a pivotal scene in the post-pubescent-but-still-immature mega-hit Animal House. That’s where a quartet of Delta House denizens bring their dates along to see Otis Day and the Knights and meet with a less-than-welcoming reception. Maybe you can bankroll a long overdue Animal House museum and toga-themed resort…if you have the Shama Lama Ding Dong! [Post by Anne D. Bernstein]

111 West Marine Drive, Astoria, OR
Directions:
Start at the Astoria Visitor Center and ask for directions to Goonies sights. The Goonies house is privately owned, and no longer welcomes visitors.
Phone:
503-325-6311
Admission:
Free
RA Rates:
Worth a Detour

One Response to “Goonies in the Boonies”