Casa Bonita: He Dove To Forget

Since it opened in 1974, Casa Bonita in Lakewood, Colorado, has entertained its fajita-eating patrons with indoor cliff divers. They plunge — sometimes wearing straight-jackets, sometimes juggling fire — from a precipice into a 35,000-gallon lagoon every 15 minutes, which works out to something like a million dives in one Mexican restaurant. 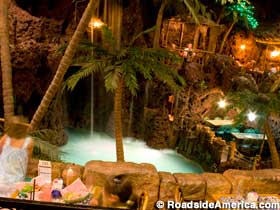 The divers come from Rocky Mountain-area colleges and high schools, not Acapulco, said Peer Osby, Casa Bonita’s assistant manager. We asked him if any diver went on to greater fame than even “the world’s most exciting restaurant” could provide. Peer remembered one, we’ll call him “Bill,” who was chosen for the U.S. diving team at the 1980 Olympic Games. “But it was canceled,” said Peer, recalling America’s boycott of the Games that year after Russia invaded Afghanistan.

Bill didn’t go anywhere. “He was a diver for us for 20 years, off and on,” said Peer. Bill’s luck went bad again when he began dating Mary Lou Retton, America’s gymnastic sweetheart of the 1984 Olympic Games (which were boycotted by Russia). “He was living with her,” said Peer. “Then one day she said, ‘I’ve met somebody else,’ and ran off.” Mary Lou ended up marrying a former University of Texas quarterback. Bill, according to Peer, stayed single.

Did Bill think of Mary Lou, or his lost chance at Olympic gold, as he back-flipped into the Casa Bonita lagoon dressed as a gunslinger or a pirate? Peer couldn’t say, but he believed Bill’s tales of love with Mary Lou. “He had pictures to prove it.”

Sections: Places Comments Off on Casa Bonita: He Dove To Forget