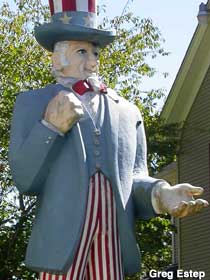 The origins of America’s favorite roadside giant, the Muffler Man, is something that we’ve fairly well established. But cloudy patriotic plasma enshrouds another type of goliath, the giant Uncle Sams.

A lengthy article in the Toledo Blade purports to pull back that red, white, and blue veil — at least for three of the giant statues. It claims that they all went up in the 1960s for a now-defunct Toledo, Ohio, burger chain named “Uncle Sam’s.”

These top-hatted titans have since moved to Ottawa Lake, Michigan (the tallest, claimed 42-ft.), Convoy, Ohio, and Hatch, New Mexico (after being bought for $14,000 from an owner in Waynesville, Ohio). And we were roadgeek-fascinated to read that the extended hand of these Uncle Sams was meant to grasp a large hamburger (the meat-and-bun proved too heavy to hold). 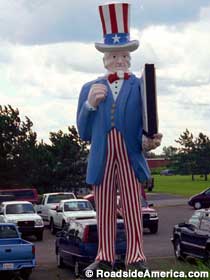 But for us, the article raises as many questions as it answers.

If the Uncle Sams really were made by the same “fellow in Wisconsin” for the same chain, why do the statues now in Michigan and New Mexico look so different?

The Toledo-focused story doesn’t explore the origins of the other Uncle Sams. Michigan’s Uncle Sam has a visual twin (claimed to be 36-ft. tall) in Lake George, New York. Identical versions of New Mexico’s Uncle Sam can be found in Virginia, Minnesota, and Vincennes, Indiana (with similar body and head-sinking-into-collar molds used to create the Ice-Men seen in New Castle and Montpelier, IN). Where did they come from? Did Uncle Sam’s have a copycat parasite, like Burger Chef was to Burger King? Uncle Sames? Uncle Shams? Or did the statue maker, molds on hand, manufacture Sams for unrelated businesses (actually, this is likely)….

The surviving owner of Uncle Sam’s says in the story that “anti-government” sentiment in the early 1970s contributed to the demise of his franchise. But it obviously had no effect on the giant mascots. They have not only survived, but have apparently mutated and multiplied.

Sections: Statues Comments Off on History Of Giant Uncle Sams Revealed, Sort Of