The Inevitable Return Of Nothing 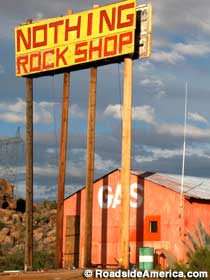 The zero-population town of Nothing, Arizona, which had been sold and abandoned in 2005, has a new owner. According to the Arizona Republic, former pig farmer Mike Jensen has purchased the six-acre site, cleaned away most of the garbage, and put up a sign outside of its empty mini-mart “that promises a new Nothing is coming soon.” Mike sells pizzas in the mini-mart parking lot from a portable oven that he also hauls to NASCAR events. He plans to reopen the mini-mart and stock it with souvenirs.

Nothing is along an empty stretch of US 93, the most direct route between Las Vegas and Phoenix. Those cities have been rocked by the collapse of the housing bubble, so maybe Mike can entice foreclosed settlers to Nothing, creating a new post-urban utopia? Oh, wait — that option already exists in Arizona….

Sections: Attraction News Comments Off on The Inevitable Return Of Nothing