« McKinley’s Gun: A Curatorial Conundrum | Main | Spook Hill Monument: An Uphill (Or Is It Downhill?) Battle »

Is My Museum Lying To Me? 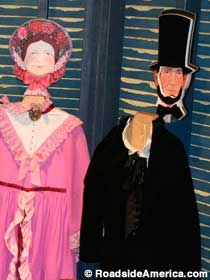 The Chicago Sun-Times has published a muckraking report suggesting that the Lincoln stovepipe hat currently displayed in the Lincoln Museum in Springfield, Illinois, may not be Abe’s at all.

The controversy, such as it is, centers on the Museum’s refusal to acknowledge to visitors that the hat isn’t 100 percent confirmed to have once sat atop Abraham Lincoln’s head.

We haven’t a clue how many stovepipe hats worn by Lincoln may in fact be hanging around, but we can say that the hat on display at the Lincoln Museum certainly looks like an old Lincoln hat, and not like a souvenir stovepipe hat, which usually resembles a Pilgrim’s hat without the buckle. In fact, when we visited the museum a couple of years ago, we were disappointed that there was no Lincoln stovepipe hat on display. You pay good money to visit the Lincoln Museum, you expect to see that ridiculous hat. 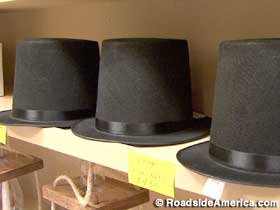 Mount Vernon in Virginia, for example, respects the allure of George Washington’s wooden choppers and gives its visitors the full false teeth experience (if the teeth aren’t on tour).

Going to an attraction is a lot like going to a movie — it’s always better when you believe everything you see (The Museum of Jurassic Technology in California is an excellent example of this premise). Sharing air with something important makes you want to snap a photo and boast to your friends and co-workers. You’ll never guess what I saw! No one brags that they saw a replica or something that maybe was what it was supposed to be.

Our advice: Don’t ruin your travel experience wondering if what you’re looking at really is the head of a man creature, or the world’s oldest ham, or Saddam Hussein’s favorite candy bar. The sign says it is; that’s good enough for us.

Sections: Attraction News, Rants Comments Off on Is My Museum Lying To Me?